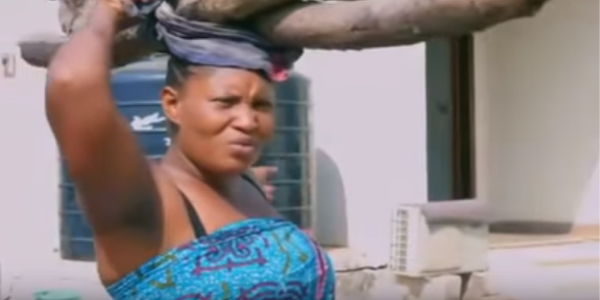 After a successful London premiere, we finally got to see Overflow Production’s romantic comedy, SHUKI’s Ghana premiere at the Silverbird Cinemas over the weekend.

‘SHUKI’ is a romantic comedy that follows the lives of couple, Dennis and Shuki. After dating city girls who always ended up disappointing him, Dennis decides to marry a village girl, Shuki.

The story gets interesting when Dennis‘ brother Derrick decides to teach her etiquettes and also how to use the internet. She picks it all up at a fast pace and in no time she is hooked to her smart phone and the internet. Her new addiction changes her innate distinct qualities and attitude that attracted Dennis. This starts to take a toll on their marriage and the dynamics of their relationships begin to change.

Hassana Sampah does great in her role as Shuki. She is sticks to a broken English for a her the delivery of her lines and also does well in her depiction of the idea of a ‘village’ lady. Frank Artus who plays the role of Dennis also compliments her performance and they are able to create and deliver on all the humor and funny moments that this story has to offer.

James Gardiner also manages to put up a decent performance in his role as Derrick. He provides a contrast on the character Dennis giving the story so balance. The film also stars Kofi Adjorlolo, Peter Ritchie and Matilda Asare.

Shuki in her quest to upgrade herself for her husband ends up losing herself making her almost unrecognizable. Something that happens in many present-day relationships and takes several forms.  This film does well to remind you not to lose focus of who you are or what you have you in the chase for likes comments and digital validation. Her transition from ‘analogue‘ to ‘digital‘ was too swift and abrupt making it seem like she changed overnight.

She lost her distinct accent and pidgin slang at some point making it seem so much like a drastic change in the character. Maybe the story required that, but we feel if we had slowly been eased in to her “upgraded” self we wouldn’t have be left confused.

Besides the main soundtrack which was an original tune recorded for the film, there seemed to be too many several stock music that were used in scoring the film. These stock music only succeed at taking our minds back to where we had first heard them. It would have better helped if more original scores had been used.

We also feel a lot more could have been done to explain why Dennis’ decision to marry someone from the ‘village‘.  A deeper explanation could have help preached a positive message that encourage people to marry whoever their heart desires as long they love them enough regardless of their social or educational standing. For us the reasons provided in his film seemed a bit too trivial and didn’t add much weight to the story.  It is almost as if the director, Salifu Zakari didn’t have much to go on with in the screenplay as most of the film comprises of scenes of Dennis and Shuki.

GhMoviefreak.com scores this film 5.7/10. It’s an okay story that could have been broaden a bit more. Overall, it’s a funny film that also does well at remind us how much we have become so addicted to the digital world of technology which in many ways is reducing physical human interactions and negatively affecting relationships.

You are sure to be entertained by Shuki and her antics whilst picking up so valuable social lessons and the addictive nature of technology.

SHUKI is still showing at the Silverbird Cinemas so make some time to go see it. If you have already seen it do well to share with us your thoughts on this film in the comments section below. You can also add your voice to our rating for this film by choosing between 1 to 5 stars in the user rating section below.