Movie Review: The Slave King: The Chains That Bind Us.

Movie Review: ‘JULOR’ - When A Thief Comes At Night. 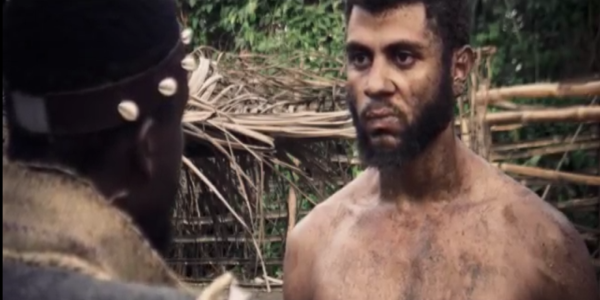 Sometime early last year we chanced on some behind the scene shots of the making of “The Slave King”. We were immediately impressed with it. Clearly, it oozed dozes of adventure and fiction which are not common elements we find in the recent crop of Ghanaian Films.

The Slave King is an adventure story about a young man Guru, who is captured and enslaved by warriors of a ruthless king.  He’s made to serve as a royal guard and betrays his king after he finds out that the love of his life Akusha, has been captured by the same warriors, and is to get married to the king. His life is drawn into more danger as he now tries to revenge for all he’s lost.

Before you go to see this film you need to know that the story was written by 17 year old Gilbert Ramy Carrey when he was just 11 years old. Yes, that was 6 years ago. Although purely a work of fiction, the connection to reality is clearly evident and knowing that it was written by an 11 year old makes it even more appreciable.

Adventure and imagination seem to walk hand in hand as it is almost impossible to tell a good adventurous tale without having to be a bit more imaginative in your thought process. Anyone can argue that the idea of a captive rising up against his captors in an adventure themed film should be easy to work around. But on the contrary it takes a lot of effort to tell an intriguing tale along those lines without ending up with a film that appears too recycled.

“The Slave King” manages to sets its own path and stays true to it.  With a story that depicts traits of bravery, pride, loyalty, love, reverence and humility in the most simplest of ways.

Although a greater part of “The Slave King” left a lot of plot holes in the film by the time it ended, we can’t ignore the attention that was given to some petty relevant details that were not compromised on to give more depth to the story being told. A good example would be the explanation of why Guru (the character played by Jose Tolbert) happened to be far more light skinned than everyone else in the film. This was carefully placed in the dialogue and could easily be missed by anyone not paying attention to the dialogue.  But it was clear enough and gave more depth to the backstory of Guru’s character.

We also appreciate the use of an unknown dialect in certain aspects of the film. Although the plot uses a very distinct setting, it would have been confusing and easy for anyone to associate its slavery theme to any one particular tribe. Even with the traces of Ga, Hausa and Akan the intent was quite clear. We believe that the approach helped to disassociate its theme from any one particular Ghanaian tribe so as not create any ethnic discomforts. But then; the English dialogue in the film sounded too “modern” and “polished” so did not seem to sit well with the film’s purported setting and period. Dialogue typically has to reflect and compliment the setting and period of the film to draw the viewer in a bit more. Someway, the otherwise strong performances from the casts in this film were a bit marred by the English language that didn’t gel with its setting and period.

As much as it was very easy to keep up with the screenplay and the progress of the film, we didn’t quite feel comfortable with the film not having a clearly defined timeline of events. It became a bit of a burden struggling to figure out how recent some of the events in the film had happened or how long they had actually happened for.

There was also a huge disconnect in the costuming used. Somehow the costumed won by the new queen during the marriage ceremony didn’t quit fit in with the other costumes being used which had otherwise perfectly suited the film’s theme and setting.

The challenge with this film was developing a captivating screenplay from the ideas and imaginations of an 11 year old boy. And in our opinion, Director Devine Jones took a good shot at it considering that this happens to be his first feature film we’ve seen. Although not entirely perfect, it was a daring feat and he deserves to be commended.

We observed that the cinematography in this film was intended to be grim and gritty to purposely give it an intriguing cinematic feel. However, the editing wasn’t so refined in some scenes which left the images a bit blurred with bad contrasts. The ADR fixes were easily noticeable with some pardonable slips in the lip syncs. But could have still been done better.

A story of this nature certainly would require several more extras and a lot more logistics to better detail. But it is obvious the amount of effort and dedication put into this film by the cast and crew who did their best with whatever they had at their disposal.

We feel this film deserves an above average 6.1/10 rating. It delivered decently on the story it intended to tell. Although far from perfect, the attempt at a genre of film this complex should be acknowledged and applauded.

It’s evident that the young writer Gilbert Ramy Carrey has got limitless potential when it comes to film and it would be a complete shame if our film industry fails to encourage and help  groom him in that stride.

Sometimes the chains that bind our creativity, is our lack of imagination and our fear to risk it all. The Slave King reaffirms that with a little more effort we could fully unlock the potentials of our film industry only if dare to try.

As always if you couldn’t make it to last night’s premiere, do well to go see this film for yourself and get a better perspective of all that we are talking about.

If you’ve already seen it, kindly do well to share with us your thoughts on it as well in the comments section below.

Don’t forget, we do this #fortheloveoffilm.

Teaser: Have a first look at the ‘3 Cast’ film ‘The Bridge and the Gaps’.