Movie Review: Slumber Party - More Can Be Less or Is It Less Can Be More 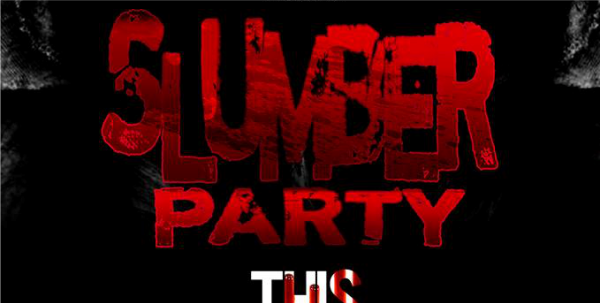 After getting its initial release date pushed back by about a year, we finally got to see SEG Cineland’s Slumber Party at its official release premiere last night.

This slasher themed film tells the story of a college party which takes the wrong turn when a killer appears after dark. And the party revelers have to find a way to survive the night as they try to figure out who is behind the murders.

Clearly, the story and the films’ theme can add up to those that sit comfortably outside the box of conventional Ghanaian film themes and stories. There certainly hasn’t been that many directors or producers who in recent times have dared to try to make a good horror flick. And we are yet to see one that could become the benchmark for the genre here in Ghana.

The acting in this film takes away a lot from it. Its understandable that the cast line up is full of fresh talents whose inexperience showed in their delivery. Not only that, the screenplay makes it difficult to point out any lead characters in the film. Most of the actors paled in comparison to the likes of David Dontoh and Vincent E. McCauley whose characters didn’t have that much screen time but still managed to add some very much needed seasoning to this film.

The cinematography in this film combines a lot of hand-held shots and close ups that didn’t give much details in the composition of the shots because of the dark nature of the grading and fast cuts used in the editing. Basically, a lot of detailing was lost in the darkness for us although we agree the director, M. Sayibu might have been going for a certain feel.  Nonetheless, there is one long take in the party scenes that was very well executed. It builds up anticipation like you would expect in any good horror flick. You get to see the characters clearly having a very good time at a party completely oblivious of any harm.

There was barely any silence in this film as you would expect in any horror film that sets you up for the jump scare. Of course, this film is about a party that turns bloody and you would no doubt be expecting the turn up at some point, but it would have been more intense build up to the party and then the killings eventually, if there was some silence at some points.

This film uses hip-hop bass infused sound score in almost all of the scenes. It gets too loud and almost unbearable at some points and even drowns out most of the dialogue that could have better sold us the characters and their personalities.  It even gets confusing at some points trying to figure out which of your senses you are supposed to yield to. Sometimes more is less and that’s clearly the case in this film.

For us at GhMoviefreak.com we feel this film considering its idea and its theme could have turned out much better than it did if more attention was given to how the story progresses, how the characters were developed and the delivery of the actors. Hence its 4.7/10 score after passing it through our rating scheme.

Slumber Party takes the approach of horror films that take a while to build up the story and then saves the fright, jump and scares for the last half an hour of its run time. But the build up to that part of the film could have been better executed especially with the characters and the events that led up to the party and also how they contributed to the story.  We would have loved for the story to have been built around some few key characters/leads which would have made it easier for the audience to bond and empathize with.

Also we seem to feel a lot more could have been done to build the characters to give more meaning to the story and its message which in the end was likely to be missed by any viewer.

The film ends with a climax that sets you up to expect a sequel and we would absolutely love for it to be made. Excerpt this time with some more clarity and less of the elements that ended up becoming distractions.

If you’ve seen Slumber Party, share with us your thoughts on it in the comments section below. If you are yet to see it, make sure you check it out when you get the chance to #forthelovoffilm

Also, don’t forget to add your voice to our rating for this film by choosing between 1 to 5 stars in the user rating section below.