Movie Review: Sometimes In Yesterday – When Pain Haunts You 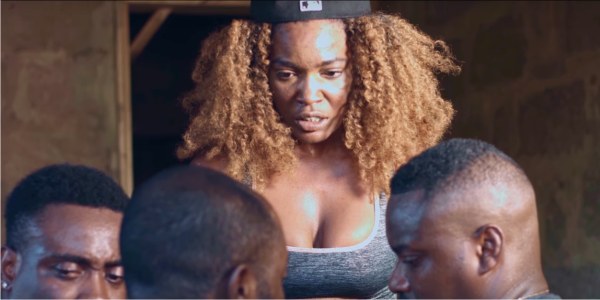 Film in subtle ways can shape and influence our thinking and approaches to handling future situations. That’s why film is a powerful tool. Hence the need for it to be used to spark conversations. Our industry might not be big enough, but we too have that same power and its only a matter of how to use it. Even if it’s on difficult subjects like rape.

Sometimes in Yesterday, tells the story of Maureen, a mentally scarred rape victim and how her past haunts her even after she had escaped and moved on with her life.

Fella Makafui plays a younger Maureen and her delivery and interpretation of the character is very much in line with that of the older Maureen played by Jessica Larny. The two actresses, together, in different timelines of events, are able to bring to bane the mentally scarred and distraught persona of Maureen. Her pain and strength in contrast with her maturity is clearly evident in the delivery from either of the two actresses.

The screenplay uses several flash backs to help us connect the dots as the story progresses. But we were still left confused by some of the events that occur in the film and when in the timeline in the life of Maureen they occurred. Maybe it could be as a result of how the scenes were sequenced or how the screenplay was done and its influence on the final edit.

It also felt like some of the central character’s back stories didn’t have as much weight as the others, making them appear almost irrelevant in the grand scheme of things.

Several other inconsistencies made the story more confusing for us. For instance, Maureen in the voiceover narration in the trailer, tells us that she was raped by her stepfather but the dialogue as well as events in the film identifies the said character as her uncle and brother to her mum.

Surprisingly, this film seemed to lack the religious/Christian accentuation noticeable in the recent few Pascal Amanfo (who directs this film) films that we have seen. With the film’s central theme being about rape, we conditioned our minds for some form of subtle Christian approach to handling such situations, being that he is a Christian …. but there was none. Regardless, Pascal’s directorial presence is still very heavy on this film.

The production elements in this film on the other hand were decent. We found impressive how the editing complimented the cinematographers use of dolly and some counter zooming styles in some of the important scenes in this film.

GhMoviefreak.com feels this film deserves a 6.8/10 rating. We seem to think the weight of the film’s subject got lost on us at some points in its run time. In the end, we couldn’t also get the import of the film’s title and the connection with the story it told. Maybe it was just a clever play on words that stuck.

It is always refreshing to see a film that not only seeks to entertain but also carries a message to either reproach, awaken or inspire people. However, if it must be done then it should be done well. At no point should the film’s central theme be lost or become confusing to the audience. Even if the choice is to deliver the message subtly, it should be clear and concise at pricking the right emotions and psychological reservoirs so as to drive the message home. After all, the most important part of any film is its theme and the message.

For us, Sometime In Yesterday could have done better at drumming home its message. Although at the end of the film it finds a way to remind the audience of the need for a constant discourse on rape and such sensitive matters.

Make time to go see this film at the Silverbird cinemas as its still showing over the weekend to be a better judge. Also, be on the lookout for other screening dates and venues as well.

If you were at the premiere for “Sometime In Yesterday” last night, kindly share with us your thoughts and opinions about it in the comments section below.

Movie Review: “LUCKY” – Abstrakte, Coloring Outside the Lines of Our Social Construct.