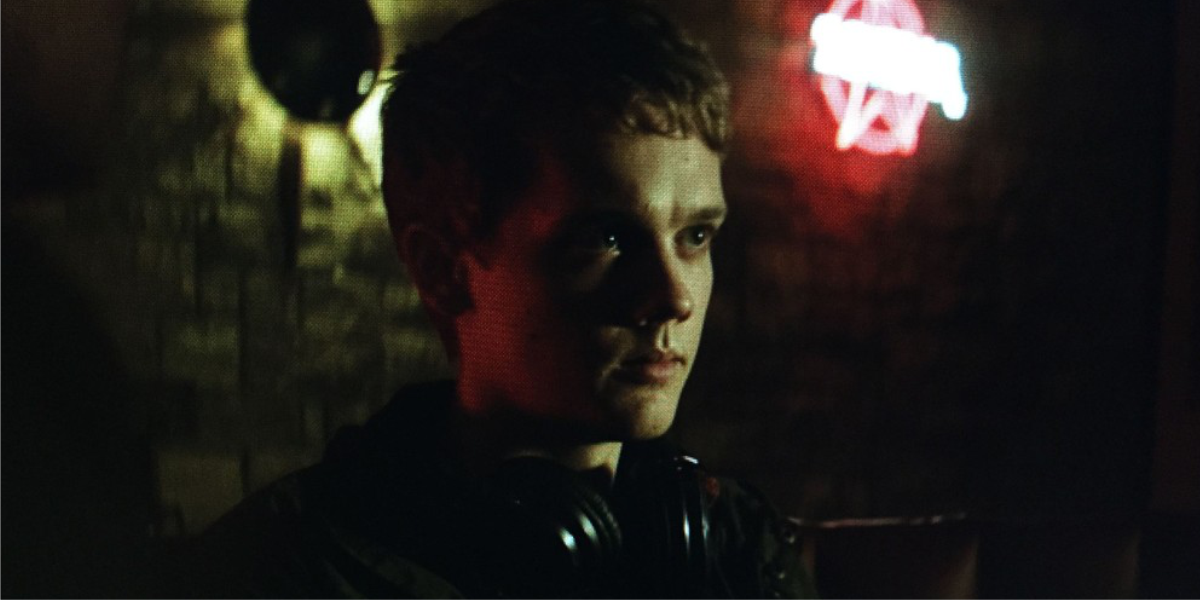 Soundwave found a way to remind me of Tron Legacy (2010) in the early 10 mins of the film. Not that it had any particular semblances or anything… but for a small budget film with no big names, it picks a great idea and delivers on the Sci-fi look and feel right from the get go.

Ben Boyles (Hunter Doohan) works in a repair shop where he fixes old radios and sound equipment for old folks. He lives under the supervision of Antonio (Mike Beaver) who happens to be a friend of his lost father. With hopes of hearing his father’s last conversation and solving the mystery of what happened to him, he invents this sound device that allows him to listen into the past.

He helps Detective Macy (Vince Napo) to solve some crimes with his device for a fee. But Macy has his own plans of getting rich off Ben’s ingenious invention. He introduces Ben to John (Paul Tassone) who offers him plenty money in exchange for the device. Ben’s refusal leads to murders and a hunt for him and this contraption that allows you listen to the past.

The story still finds a way to throw in a bit of decent young romance into the fray. Katie (Katie Owsley) is a convenience store clerk whom Ben has been listening to on his device and had obviously fallen for. He overhears a 911 call that forces him to go to her rescue and he is forced to open up about his invention to her. She eventually helps him to elude his pursuers as the dynamics of their relationship gets tested.

Hunter does well with his performance in this film and is definitely a talent to watch out for in future endeavors. Although he doesn’t get to say too many words in this film, his entire demeanor communicates volumes. He passes for an average nerdy teen with emotional issues that require some form of closure. And we get to see him display several different levels of emotions along the length of this film.

Hopefully Hunter should be able to land something major that puts him in the limelight on the back of his promising performance in Soundwave.

The film also does well to explain the science behind what is happening in the film, making it a bit believable. You don’t have to be an expert on sound waves and the psychics around it to be convinced that this is something that could possibly work. Hopefully this is one of those tech ideas that doesn’t actually gets made.

The use of freeze frames and voiceovers for the scenes when the device is being used felt a bit confusing and unusual at first. But once you get used to idea and how it plays into the story telling it is easier to follow and doesn’t quite confuse you anymore… well at least for some part of the film. Perhaps there could have been a much more creative way to depict this in the film… nonetheless it works regardless.

Dylan K. Narang who wrote and directed this film keeps it balanced by giving us a look at all the negatives that an invention like this can come with. Besides it being obviously creepy that Ben had been spying on Katie and other people all this while, invading her privacy even in her most vulnerable moments, we also get to see how terrible and destructive a device like this could be in the wrong hands. Ben has his reasons for creating it but in the end his reasons are not justifiable enough. Even if having this tech makes him a hero, he still has his own conscience to fight with all the time.

I would rate this film 6.8/10. Soundwave is clearly a small budget film but was very well shot and edited to give you a close enough look and feel to what you would usually get from a big budget Sci-fi project.

I am not sure about the climax as you aren’t sure if Ben has his hearing damaged or he was just faking it.  But I guess the choice to end the film that way was to leave something for viewers to debate over and also probably to set up the idea of a possible sequel.