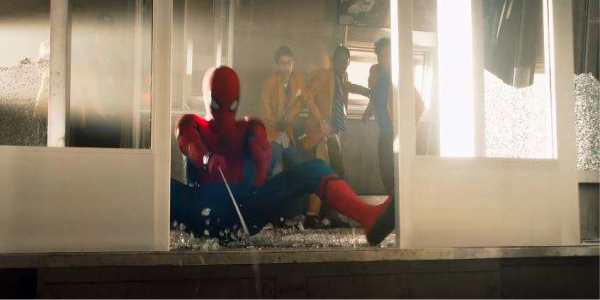 It’s been a lot of running around scrambling to bring you a refreshed experience on GhMovieFreak.com to commemorate our 3rd year of existence. So pardon us for a delay in this review but trust that we’ve got some other amazing things cooking, brace yourselves.

We finally got to see Spider-Man:  Homecoming here on this side of the world last Friday and oh it really was worth the wait.  Yes in case you didn’t know Marvel Universe’ latest addition to their catalog of comics is out.

It seems the intent of this film is to really sort of get people to see the new Spider-Man films as a central part of the marvel cinematic universe alongside Ironman, Captain America and the rest of the avengers. And it works very well at doing that. As compared to all the other Spider- Man movies you might have seen in the past, this one has avengers written all over it.  Although it could still pass as an independent standalone film, it’s pretty hard to ignore all the traces of “Avengers” all over it.

The film directly follows events of Captain America: Civil War, and even uses the first few opening minutes to give a Spider-Man/Peter Parker point of view detail of events that happened in last year’s release.  Several months after the events of Captain America: Civil War, Peter Parker, with the help of his mentor Tony Stark (Iron Man), tries to balance his life as an ordinary high school student in Queens, New York City while fighting crime as his superhero alter ego Spider-Man as a new threat, the Vulture, emerges.

It seems the major thing missing from this film would be the typical origin story that would tell us how this version of Peter Parker got his powers. After all, nothing of that sort was captured in Captain America, Civil War.  Home coming just jumps to Peter as a High School kid trying to fit in whilst hoping for a bit more than an average life of a teenager.

If you loved seeing Tom Holland as Spider-Man in Civil War then you would love him even more in this film.  The film puts an entirely new twist to the Spiderman franchise we know. Giving it a more present-day lifestyle feel that might seem a bit out of place. That is, if you are really a fan of the classics.  Even his new suit doesn’t just look cool, it enables him do more than just shoot webs.  It more or less felt like a more subtle version of Tony Stark’s Ironman suit. Michael Keaton also delivers a superb touch to the film with his character as the vulture.

As is very common with Marvel films you are guaranteed the occasional bits of wit and humor mostly interspersed in the action scenes that would make you enjoy the film more.

The high note for us and any Ghanaian going to see this film would be finally getting to see our very own Abraham Attah in this big budget Hollywood project. After getting propelled into the limelight by his role in Beast of No Nation about 2 years ago, everyone has been eager to see what else he would star in. Although not a big leading role in this one, his character had adequate screen time for us as Ghanaians to acknowledge and gloat about his presence in the film. He fit very well into the films story line and delivered perfectly on the character he was tasked to play.  It’s obvious is obvious Abraham is clearly still is on his ride to the top and we are patiently waiting to see what else he’s going to get cast for next. Hopefully a much bigger role, fingers crossed.

There’s never a dull moment in this film that drags on too long and makes you wish you hadn’t cleared your schedule to make time for it.  Certainly a film that you would want to see more than once, especially to get  a better feel of Spider-Man’s new gear which leaves you wondering exactly what else he’s capable of doing. Now, we are left to endure the organizing wait for the next installment to see what more Spiderman has install for us. That’s why we would rate this homecoming experience 8/10.

In all, this is entirely a huge contrast from the other Spiderman films and really fits in the direction that the marvel cinematic universe is going with all its other standalone projects.  And it’s really exciting, wondering how Avengers: Infinity War is going to turn out like.

As to if this is the Greatest Spider Man movie of all time as it has been tagged by most other film critics, well,  we  are on the fence here. Classics are classics and can never be forgotten so you can’t fault us.

Anyways do well to go check out Spider-Man: Homecoming in the cinemas as you are most likely guaranteed to enjoy it more on a huge screen in the company of great friends and popcorn.

Do well to share with us what you also think of this film in the comments section below.