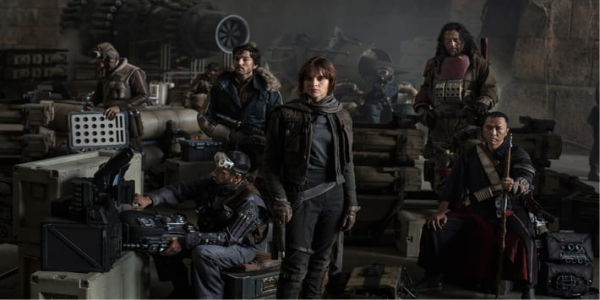 Star Wars arguably has one of the largest cult following in the movie space worldwide and it’s very easy to understand why.  Every installment you see grows on you even if it’s your first time seeing a Star Wars film.

For non-star wars followers, Rogue One isn’t a direct follow up for last year’s Star Wars: The Force Awakens. It is actually a stand-alone sub plot for events that happen several years before the events seen in last year’s installment.

In Star Wars: Rogue One  we get to follow the story of Jyn Erso, a Rebellion soldier and criminal, is about to experience her biggest challenge yet when Mon Mothma sets her out on a mission to steal the plans for the Death Star. With help from the Rebels, a master swordsman, and non-allied forces, Jyn will be in for something bigger than she thinks.

As far as science fiction and fantasy are concerned, this felt like a totally believable space setting, end of the world fantasy story. You might have no idea how big the Star Wars franchise really is and still be able to love this particular movie devoid of any expectations.

Stars Wars is one of those movies you don’t really go to for the acting precisely. You would absolutely love seeing Forest Whitaker in this movie playing a character which is quite different from what he’s most seen playing. And he was perfect at it.  Donnie Yen on the other hand plays something similar to what we most often see from him, except only blind, yet equally awesome as he always is.  His character was excellently written and you can imagine watching and enjoying a movie written about that character.

You would be impressed to know that this movie uses footage from older installments of Star Wars to recreate some scenes and even some of the characters in this movie. (Just like how old  footage was used to finish Paul Walker’s scenes for Furious 7 through CGI.)

Unlike like last years, installment (Star Wars: The Force Awakens), Rogue One shows some darkness that grips you and makes you enjoy its pace. It had everything a good war film would have, explosions, dirt, blood, close calls, violence, scheming, bravery, sacrifice etc … well plus the space weapons and the beautiful out of earth scenery.   It starts off at a slow pace and then kicks into overdrive in the last 30 minutes that makes it all worthwhile for its 134 minutes run time. The entire story line is dark, tense and a bit frightening in a nice way.

We were would have loved getting to see this particular title in 3D as well, but either which way its normal viewing did present some very lovely visuals. With extensive use of computer generated imagery you get to see more green in this Star Wars film than the last which had a lot desert like scenery.

We feel this movie deserves a fair 7.5/10 rating. Although this can’t be considered as the best Star Wars movie ever, it is somewhat very good by many film standards and provides a very good mix of science fiction and fantasy that any one is sure to enjoy.  This movie absolutely proves that you can still love a Star Wars film even if you have never followed the franchise.

If you haven’t seen this movie yet… this would be a great way to kick start your holidays with family and friends. You are guaranteed a lot of wow moments to leave you entertained and in good spirits for this season of merry making.