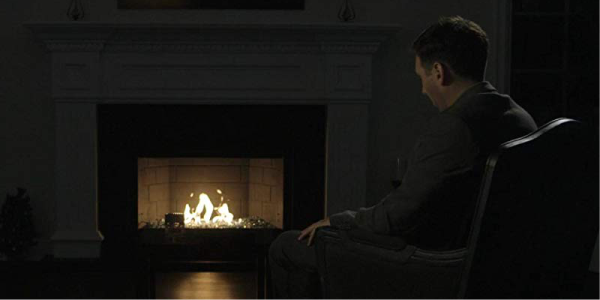 In ‘The Bestowal’, a suicidal businessman is visited by an inter-dimensional being who appears in the form of a beautiful woman.

Steven is clearly a successful businessman who is weighed down by emotional issues so he decides to take his own life. From out of nowhere comes death in the form a strikingly gorgeous woman would tries to remind him of all the reasons why suicide can’t be an escape from all his troubles.

Actors Sam Brittan and Sharmita Bhattacharya who play the rolls of Steven and Death deliver decently  on the characters to complete the story. You sense the uneasiness when he first encounters her and you see the familiarity and affection that leads up to romance as they engage in conversation.

For a feature film debut, writer and director Andrew de Burgh chose a complex story to tell in the simplest of ways stripping bare all the extra elements and allowing the story to be told in whole through intelligent dialogue. Death appears to Steven at three different stages or times in his life that are shown as different chapters in the story. And at each time, the dialogue gets even more enthralling and engrossing revealing more about the characters at each time.

Their discourse pushes to the extremes of several issues. Almost as though Andrew made this film with the sole intent of making sure those issues become subjects of discussion for any group of persons who get to see this film. The two characters share what appears to be their honest opinions based on experiences or knowledge base on without being hostile or defensive against each other. Death, being inter-dimensional being provides answers to some of Steven’s questions. Some of which many of us might have pondered over before.

Even with though a lot of the subjects of their conversations seemed unresolved by the end of the film, it still remains thought provoking. With a plethora of issues ranging from politics, religion, philosophy, the afterlife, parallel dimensions and earthly sciences touched on.

Sharmita Bhattacharya in The Bestowal (2018)

Although it appears the film attempts to provide answers to some of the issues it highlights, we can only interpret them as the writer’s perspective and opinions so of which could be very debatable. And that’s the stroke of genius with this film. You get the sense that characters themselves might not have all the right answers or could just be asking the wrong questions at times or simply just It is even evident in how some later statements end up contradicting previous ones and opening up more reasons for debate.

The cinematography and editing used a variety of wide and close up shots to capture and detail the emotions and intensity of the performances from the actors. With virtually no movement of the characters around the settings, you just have to rely on their expressions to get a better feel of the emotions behind whatever details they chose to share.

The dialogue does get boring at some points but it still feels like it is going somewhere for a greater part of the film and you are left with no choice than to pay close attention so as not to miss anything important.

The Bestowal is a film that might appeal more to your intellect than your emotions yet it still does both in unique way. It allows you to be introspective about your life and some of your choices on faith, politics and even technology and how that might have affected the people in your life as well.

This two cast film mixes drama, sci-fi and decent portions of romance in the most unexpected way you can imagine. Personally, I am eager to see more projects from Andrew de Burgh to see if this unique style and choice of themes runs through all his work. It’s an admiral attempt and should be the stepping stone for greater and more daring things from him.

You can also check out The Bestowal also as it is available for streaming on Amazon Prime Video.