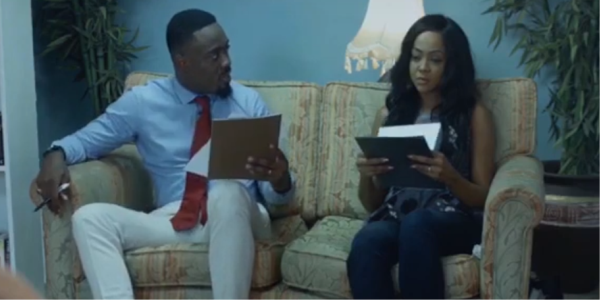 For a film that is entirely set in one location with only 3 characters for it’s about 80mins runtime, you would think that it would get boring and stale after some time. But it packs more than enough to keep you engrossed in its story from start to end.

The Bridge & The Gaps is the story about a couple with a failing marriage who end up in the office of a counselor seeking solutions to whatever problems they have.

Jasmine Baroudi in The Bridge & The Gaps

Mr. Johnson (played by Toosweet Anan) depicts the typical African man, although educated and successful he finds it difficult and wrong to speak to anyone especially and stranger in the person of a counselor about his marital problems. But the part of him that wants his marriage to work makes him give in and then he begins to open up. Mrs. Johnson (played by Jasmine Baroudi) is all about getting their issues fixed, forgetting that she too might have a role to play in whatever problems their marriage might be facing.  Together, they discover more about each other that could either be the bridge that leads them into a happier married life or the flaws the widen the gaps in their bond.

The dialogue in this film reveals more than enough of the couple to keep you interested in their story as you wait for the resolution of the story. You get to witness each of them go through a flurry of emotions, from surprise, anger, joy right down to dejection and the thirst for revenge.

Performance wise, both Jasmine Baroudi and Toosweet Annan deliver decently on the characters they played. Their onscreen chemistry was there and they did well to sell the love-hate relationship that was required to drive the story. And for Michelle McKinney Hammond, her role as the counselor came too easy for her as she fit right into the story being told.

Michelle McKinney Hammond in The Bridge & The Gaps

The film gets more intense as the revelations begin to unfold. The partners bare it all out to each other breaking each other’s mental defenses whilst seeking to prove that they might be a better partner than the other.

There were some few moments along the story that begged for flashbacks which could have further gripped the audience attention and better immersed them deeper into the story.

For a film that was done on just one location, the sound could have been better executed. There were several points that had the levels of the sound from the characters fluctuating so much that it required the viewer to be a bit more attentive to keep up with the conversation.

The lighting could also have been well executed as there were constant very obvious switches from cool to warm and back to cool lighting that marred the fluidity of some the cuts in the scenes that required capturing of the expressions of all 3 characters.

We would rate this film 5.8/10 on our rating scale. It is intense and cuts straight to the chase of delivering wholesome family entertainment and drama whilst delivering some priceless nuggets on how to address and handle some situations in romantic relationships.

The Bridge & the Gaps is a decent family movie that could be best enjoyed by everyone especially in the company of your significant other. It sets the tone for very much needed conversations that every   relationship might need to have at some point.

If you are yet to see this film, you should make some time to visit the Silverbird Cinemas as soon as possible as it is still showing.  Also do well to share with us your thoughts on it in the comments section below.

Don’t forget you too can add your voice to the rating of this film by scoring it between 1 and 5 stars in the rating section below.

Movie Review: ‘JULOR’ – When A Thief Comes At Night.