Movie Review: The King with No Culture – “EPIC” TALES OF DECEIT 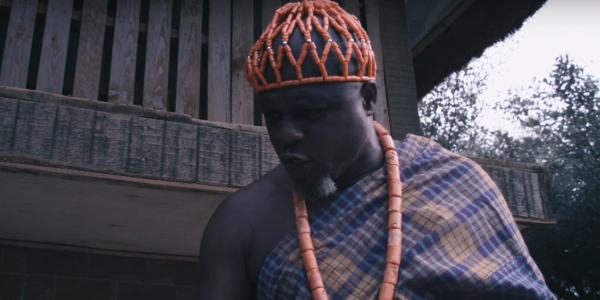 The easiest route to a flop any producer or filmmaker can take is over hyping a film and then failing to deliver per the expectations of the audience. Marketing a film is not only talk but being able to back it up with a final product that somewhat satisfies the masses.

The producers of “The King with No Culture” did a great job generating some buzz for their film with a very catchy title as well as enough noise to get people interested in seeing the film.

The film tells the story of a kingdom ruled by a tyrannical and greedy “King with no culture” who marries the wife of his biggest threat after killing him. In the grand scheme of things, the new wife bares him a son to inherit the throne who sets out to liberate his people from tyranny.

The film’s central plot is not anything we have not seen before. A pretty much simple idea, in our opinion but we feel the writer ended up saturating it with too many complications in an attempt to broaden the depth of the story. There is politics, revenge, family feuds, civil war and then magic/sorcery all crammed up into the story. The saturation forced the use of some characters in the film who didn’t have enough screen time for them and their relevance to the story to be understood.

Possibly, like everyone else, we went into this film with high expectations. Which film lover wouldn’t jump at the idea of seeing an “Epic” film as advertised by the makers of the film?

Although there is no clear-cut explanation for what an epic film is, it is typically a film with a story told so well either with mind blowing visuals, a captivating sound score accompanied by grandeur and spectacle. Ultimately, it’s the audience who decide if a film is epic or not, depending on how well it delivers.

Unfortunately, “The King with No Culture” comes nowhere close to deserving that tag. In its runtime of about 70mins, this film packs not enough punch or spice to leave the viewer marveled. Neither does it succeed at taking the viewer on a journey leading up to a remarkable climax. It only succeeds at using poorly developed characters to tell its story from start to end.

The film’s cinematography makes use of quick cuts-to aerial shots and then back in almost every scene. This swift change of perspective appeared confusing for us at some points in the film.  We feel the editing was also poorly done.  The color grading changes mid-way into the film in one scene for no artistic reason. Also, there were scenes with two different sound scores of varying feels overlaying each other. And then there was the needless visual effects for the final scene in the movie that we feel was unnecessary.  It’s almost as if the entire editing job for this film was shabbily done with no proper approach or direction.

This film scored a well deserving 4.4/10 on our rating scale. It succeeds at telling its story with averagely done cinematography and sound. But fails massively at delivering anything either grandiose or unpretentious worthy of being described as epic by any standards.

For being gutsy enough to compare his film to Marvel’s Black Panther (2018), director and producer Destiny Austine Omon, only set himself and his work up for slaughter at the hands of anyone who goes to see his film.

Maybe it was marketing tactics to give the movie the much-needed hype. But then again what’s hype if it can’t be backed up by delivery? Why set people’s expectations so high when you can’t deliver?

Our film industry might not be on firm grounds yet, but we are steadily getting there. And this depends largely on the patronage of Ghanaian films at the cinemas. How can we sustain the cinema culture and subsequently grow the film industry if our filmmakers continue to fail at satisfying the masses?

Maybe we wouldn’t have to keep on asking these questions for long.

If you did get to see “The King With No Culture” over the weekend kindly share your thoughts and feedback with us in the comments section below.  If you haven’t try to go see it #fortheloveoffilm as it’s still showing in cinemas.

Movie Review: Once Upon The 80’s – Where Will Our Films Go Without Substance?