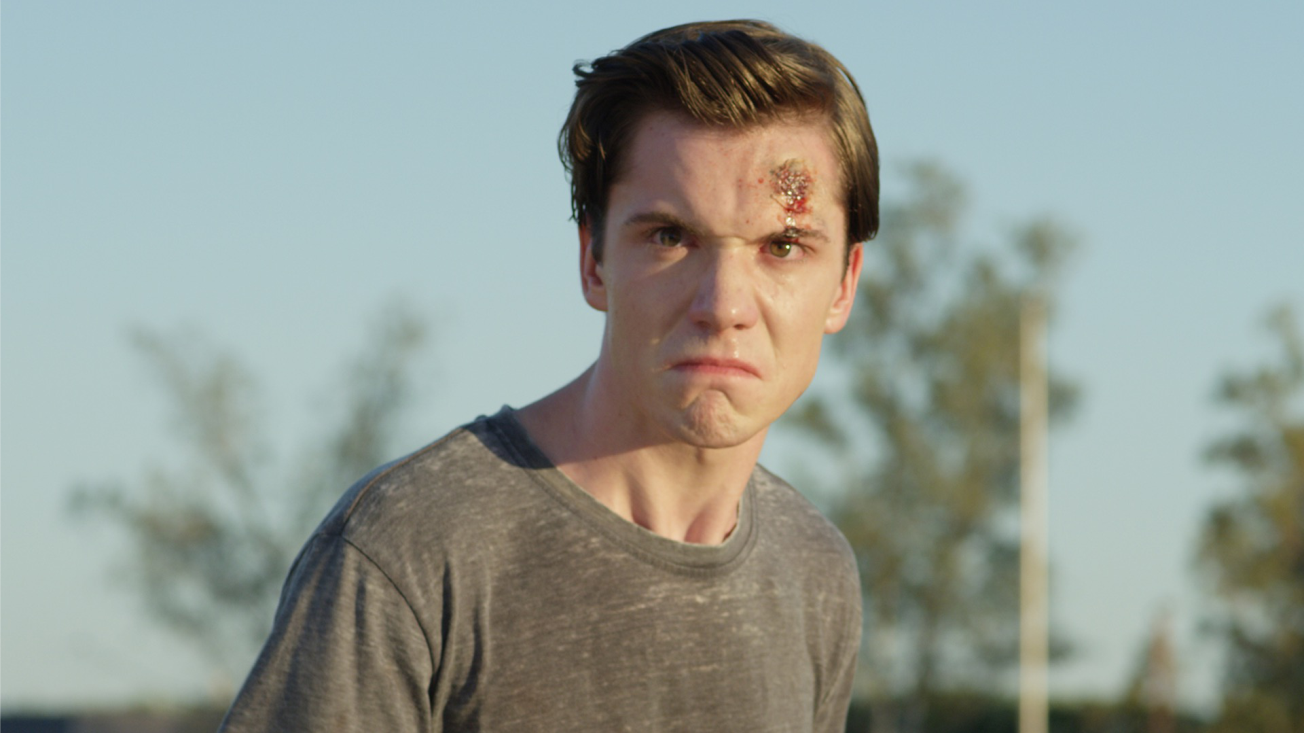 Kelly (Elijah Nelson) has an unusual eating disorder called pica, feasting on inedible items like paper, Styrofoam, and erasers. Doctors are not being of much help and his classmates pick the least chance they get. His single mother also can’t help with the situation and is at her wit’s end. With his condition worsening, she hires a faith healer to lay hands on a bedridden Kelly. The healing ritual ends in disaster but serves its purpose, and even more surprising, Kelly gains supernatural powers; any pain inflicted on him is instead felt by his aggressor. The next time a classmate attacks him, for every punch landed on Kelly the bully bleeds and Kelly heals.

You can imagine how much having power like this can affect the life of a bullied kid. Kelly’s confidence grows much to the admiration of Dominique (Kayla Carlson) one of his classmates who genuinely seems to care about him. As much as Kelly tries to stay away from these bullies, the more they want to keep on tormenting him.

At least until one night when they hit and run him over whilst he is riding his bike down the street at night. As he is hit, crushed and dragged under the car, all his injuries are transferred to the driver who ends od dying instead and Kelly survives unscathed.

The bullies begin to spread lies that Kelly was responsible for their friend’s death because Kelly whilst on his bike jumped in front of their car and in a bid to avoid him they got in a wrecked leading to the driver’s death. They even go further trying to settle the score with their friend’s death. A prank goes wrong leading to a gas explosion that kills Kelly’s mum.

‘The Unhealer‘ and its premise seems like something out of someone’s wildest imaginations. However, it is a great concept. Director Martin Guigi executes the imaginations of the writers well enough to make this story, even more, easier to enjoy.

It is a classic revenge story however with a bit of mysticism. The powers that Kelly gets from the faith healer is explained to be from a Native American tribe. Pflueger (Lance Henriksen) the faith healer is a con artist who raids graves for ancient artefacts to sell. He came by those powers after breaking into a grave that contained that ancient Shaman power. On his tail is Red Elk (Branscombe Richmond) Native American elder whose family has for generations protected the shaman medicine.

When he soon discovers that these bullies might have had a hand in his mother’s death, Kelly blinded by rage goes on a rampage trying to make them pay. Dominique does her best to stop him but his powers consume him.

Red Elk soon discovers that Kelly has possession of the powers and who do anything to stop him from getting consumed by them.

By the end, Kelly is both the hero and the villain. But even with his motivations made clear, his actions are yet not justifiable enough. Anyone who has been bullied can understand his pain and his desire for revenge. But is revenge ever enough?

Overall, the film is quite entertaining and enjoyable once you give it a chance. It is far from scary and isn’t something you would consider ‘horror’ albeit having some ghastly scenes and a supernatural theme.

I would rate ‘The Unhealer’ 5/10 just because of its story and the quirky way it delivers it. It also manages to deliver a strong message without having to be emotionally intense.  Revenge hurts even when it feels good can’t be justified regardless of the circumstance.

‘The Unhealer‘ might be a small film that falls under the radar but it is certainly a must-watch so give it a chance. You can purchase it on iTunes or Amazon.