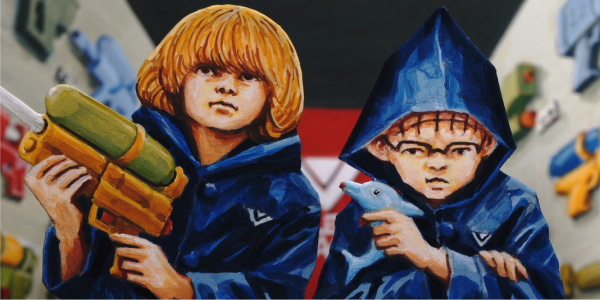 In Violence Voyager, Bobby decides to go with his friend Akkun into the mountains outside their village, to a place perfect for a secret base. On the way they stop into a mysterious amusement park. They have fun there and gradually learn the truth behind the facility. The place was set up by a man named Koike to trap passing children, whom he uses to feed his son Takashi in order to keep him alive.

Off the top, this sound like a very insane idea for an animation. Especially one that is most likely to be seen by kids. Bobby and Akkun are like every day kids looking for adventure. The quest leads them into a situation they could never have imagined even after someone had tried to warn them. And even still, curiosity gets a better part of them when they are supposed to be thinking about an escape.

It is difficult to describe the animation style but it works well at completing the film. It uses two-dimensional cutout illustrations, moving backgrounds, depth and focus as well as lighting and shadows to complete the storytelling. All this appears seamlessly done almost as though it’s a style of animation that has been around for years and we are only getting introduced to it by Uchija, the writer and director of this film.

The voice over acting is strong and convincing enough to sell you not just the story, but the characters as well. There are also some well-placed sound effects that complete the gritty and grimy feel that it supposed to have.

The story itself makes it easier for you to accept and sit through this somewhat unconventional and unique style of animation which feels almost experimental. It is slow paced but still manages to get upbeat and intense at some points just to keep a fine balance in the entertainment. Surprisingly, the film even though an animation still finds a way to appear extremely graphic and horrific. Detailing some very gruesome and gnarly violence. It becomes even grotesque and absurd with the gushes of blood and spurts of vomit from the characters.

The characters in the film display love and bravery in many ways. Even in impossible situations and adversity they show love and try to fight their way out. Either for their own escape to save the life of someone the care about. This adds an endearing emotional sentiment to the story that is tough to look past.

I would score this film a well-deserved 6/10 rating. It is weird but makes for interesting viewing. It is one of those films that you would hate from the beginning and find yourself struggling to sit through, but once it is over you tend to appreciate the story and the work then went into putting it together.

Generally, it’s a bizarre experience and not some something for the easily disturbed as it takes some getting used to.  But I found myself enjoying it and wanting to see how the story ends and if I was worth the effort sitting through it. I am yet to answer that question for myself fully, but I am certain that my time wasn’t wasted at all. It turned out to be more of a thrill than I expected.

You can also watch Violence Voyager as it is available to stream on Amazon, InDemand, DIRECTV, FANDANGO, Vimeo on Demand, Vudu, AT&T as well as some other online streaming platforms as of 21st October 2019.  Make sure you check it out for yourself.