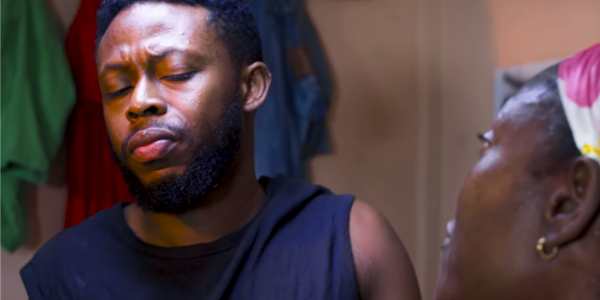 A film by Eddie Nartey

Finally, Zylofon Films, a subsidiary of Zylofon Media, have released their debut film with their star-studded in-house cast titled “The New Adabraka”and it is sure to be one that would be talked about for quite some time.

The movie centers on three unemployed friends, Escoba, Sean John and Genie who are involved in internet scam. Their consistent hard luck and lack of money makes life difficult for them in their community, Adabraka, where all their friends seem to be making it big. With nowhere else left to turn, they decide to visit the shrine of Mama Glizdi to better their fortunes. Unknown to them, the riches they desire does not come easy and they would have to each sacrifice something or face dire consequences.

For anybody in Ghana the subject of this film is very relatable. There are several educated unemployed youth involved in internet scam and it’s no secret that a lot of them rely on spiritualism to better their luck or to find some sure shortcut to riches.  Although a very difficult subject to talk about openly, let alone one that can be easily spoken against, film is one of the sure ways to start the conversation. That is why a film like this should be applauded and well received.

The New Adabraka, written and directed by Eddie Nartey gives a fair look at some of the frustrations that pushes young men to want to go that far. The story shows us the individual struggles of the trio and we get to see their personal motivations to succeed no matter the cost. Although not justifiable enough reasons to want to be rich at whatever cost, the three distinct situations appear very authentic and genuinely frustrating.

The film stars all the five talents signed under Zylofon Films, who have been virtually off the screens for some time now.  Collectively, they showed their worth as actors in their own distinct ways with the characters they were each tasked to play. James Gardiner delivers well on his role as Escoba, the most desperate of the trio who is jaded by his past glory as scammer. Toosweet Annan plays the role of Sean John in his typical laid back on-screen fashion but manages to pull off some emotional scenes that proves he’s more than just eye candy for the screens. Zynnell Zuh, Benedicta Gafahand Bibi Bright also did good with their performances.

We were also very much impressed with the performance of Richard Asante (Kalybos) who played the role of Genie. For the very first time, he blew us away with his performance. We actually got to see him act beyond the goofy and clumsy “Kalybos” character from the comedy skits that shot him to fame. His delivery in The New Adabraka felt a bit more organic with very believable emotions and interpretations. Even when Genie seems to be losing it, he doesn’t end up being overly goofy and clumsy like we have seen in other films he (Richard Asante) has starred in.

The film also featured some of the acting talents from the Zylofon Arts Club who were able to hold their own acting alongside their experienced seniors. It also stars, Prince David Osei and Jessica Williams.

We feel the visual effects used in this film could have been better. Yes, the story had some elements of spirituality and mysticism to it. Which definitely needed to be accentuated with the visual effects. Although it wasn’t abused, it still felt a bit too over done for us. Also, we felt the character “Mama Glidzi” (played by Bibi Bright), could have been a bit better defined. We believe, the whole mystique about her would have been more intense and her delivery more believable if the dialogue in her scenes were in a local language. Maybe we were the only ones that felt this way, but we honestly found it difficult to reconcile the idea of a powerful traditional spiritualist who seems to live life cut off from the rest of the world, speaking very clear and refined English.  Although the film’s dialogue is predominately pidgin English and some Ga it would have sufficed if it had subtitles so at least the street slang used could be understood and appreciated by all.

This first feature from Zylofon Films earned a decent 8/10 rating after passing it through our scale. The story and how it was told turned out to be equally entertaining just as it was intended to reproach and advice the youth, who are likely to find themselves in similar predicaments in their thirst for riches. The message is straight forward and can’t be missed by anyone.

The build up of the story was well thought-out and you get to see the individual, distinct personalities traits of the 3 lead subjects. Also, we were impressed by the decent camera handling and movements that often gavethe viewer a personal point of view for some of the situations.

This could arguably be the best work from Eddie Nartey we have seen in all these years. It’s almost as if he had a point to prove with this film and he undoubtedly delivered on that in our books. Perhaps it could be that he has a personal connection with the story and so could tell it exactly how he wanted to. For now, we can only sit back and wait for what else he has to offer still holding the reins for Zylofon Media’s movie department.

If you were at “The New Adabraka” premiere last night, share with us your thoughts on the film in the comments section below. If you haven’t seen it then you definitely have to go see this one #fortheloveoffilm.

Also, don’t forget to add your voice to this film’s rating using between 1 to 5 stars in theuser rating section below.