Movie Review: ‘JULOR’ - When A Thief Comes At Night. 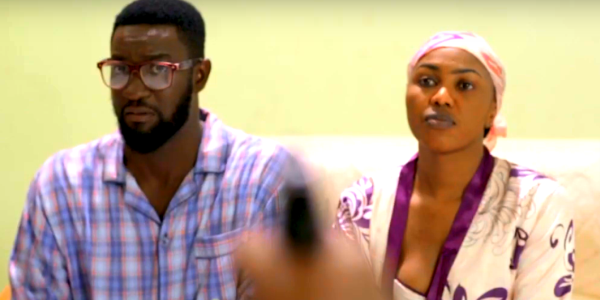 It is always inspiring to see a group of young filmmakers collaborating for the good of the industry and for the love of film. Such is the case, or so it seems, with this film directed by Justice Ornan Abadah that stars Jeffery Nortey, Anthony Woode, Sitsofe Tsikor & Ben Affat. These talents are considered by many as part of the new generation of actors gearing up to take over the film industry.

In JULOR, Aaron and Agnes are close to throwing in the towel after four months of a not so happy marriage, until a visit from ‘Jesus‘, a thief who breaks into their house one night.

Aaron (Anthony Woode) and Agnes (Sitsofe Tsikor) come off as opposites of each other. With the cracks in their relationship already showing, barely four months into the marriage, what’s left of it seems to be held together by secrets about their past lives and some mistakes they had made in the present.

The story and its revelations all unfold in the home of the couple after Aaron discovers ‘Jesus’ the thief, who had crept in to their home for his own reasons. In his bid to convince the couple to let him go, ‘Jesus’ (played by Jeffery Nortey) tries to be a cunning mediator offering his unsolicited advice and opinions to help save their marriage, possibly in exchange for his freedom. His prying and loose tongue further reveals more cracks in the relationship and soon enough,  it becomes clear that Aaron and Agnes might have failed to really get to know each other before deciding to get married.

Right from the start, the film felt more like a lengthy skit than a feature film. The acting from the cast does a decent job at holding the story together for a greater part of the film. But whilst the clarity in delivery of the dialogue by the characters makes it easy to follow and enjoy the film, it also left most of the wittiness and humor bare and very easy to predict.

We feel the story could have been made a little more intense with some complexity which would have added more believable drama and suspense towards to the climax of the film. Although the interesting twist at the end of the film gives it a decent humorous climax, some more depth in the drama and suspense would have gone a long way to correct the ‘comedy skit’ vibe that we felt from the start of the film. Not to say that skits are any bad, we just hoped that the film could have found a way to play on emotions like fear, confusion and the intensity that comes with finding a stranger in your home in the middle of the night. Maybe the film was made just for the humor and the laughs about the idea of Jesus’ coming like a thief in the night. Or maybe we missed out on all these other emotional cues that came with the story. Either which way, JULOR is entertaining on the surface and that could be all it was meant to be.

The production elements were also very decent for this film considering that all the scenes were set in almost the same location. We seem to think the sound design could have been better executed for the scene that had the characters speaking to each other from opposite sides of the closed door.

GhMoviefreak.com scores this film a well-earned 6.1/10. The story feels like a parody of a romantic drama with a dash of a crime thriller and an adequate amount of humor to keep you entertained. It is well produced and delivers on having enough for you to laugh about.

The collaborative efforts of the acting talents involved in the film as well as the outfits that share the productions credits is something that should be commended as well.  Clearly, there is enough to go around for everyone and collaborations like this would go a long way to help the growth of our industry. We are looking forward to seeing these talents team up for bigger and well executed projects in the near future.

If you have seen ‘JULOR‘, share with us what your thoughts on it in the comments section below. Don’t forget you too can add your voice to our rating of this film by scoring it between 1 to 5 stars in the rating section below.

Watch Trailer For JULOR Below