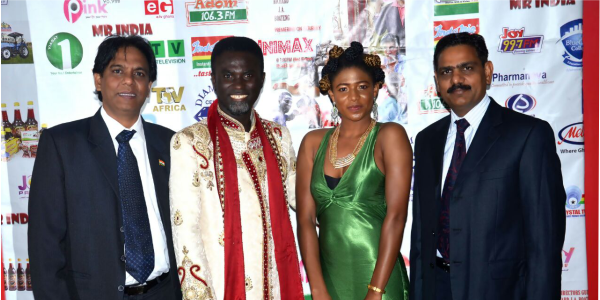 The premiere was preceded by a colorful red carpet event and interview sessions with the Second Secretary to the Indian High Commissioner, Mr. Jaswant Singh, and other key Indian dignitaries.

The auditorium was filled to capacity as cinema enthusiasts trooped in to watch Mr. India. The movie did not end without bouts of laughter from the keen audience, expressing their excitement about the movie. Notable Ghanaian actors were also there to support and enjoy the movie.

Speaking to Mr. Jaswant Singh, he said “I am very enthusiastic about the future of this collaboration and, we believe this is just the beginning of many great things to happen”.

September 2016 remains the local movie month at Global Cinemas. The organization is therefore, collaborating with local movie producers as part of efforts to mark patriotism and the birth month of Ghana’s first president, Osagyefo Dr. Kwame Nkrumah, whose birth date is on September 21st (1909).

The premiering of the movie, Mr. India and the showing of other Ghanaian movies in September is part of the larger goal of Global Cinemas to promote Ghanaian movies.

Commenting on the positive feedback on the show, the Business Manager of Global Cinemas, Mrs. Eunice Tornyi, said “The response we have received from Mr. India is awesome and we are hoping that the Ghanaian movie producers will do even more because Global Cinemas is ready to partner them in building the industry.”

A movie enthusiast, Mr. Charles Opare expressed his excitement after watching Mr. India. He said “I am impressed about the decision of Global Cinemas to support the Ghanaian Movie industry. I came with my family and we have really enjoyed ourselves. We will not miss next weekend’s show”.

Following the remarkable success of Mr. India is Pieli, another stirring Ghanaian movie set to show this Saturday at Global Cinemas. Pieli is a story of a young man on a journey of self-discovery.

‘Pieli– the rise of Montana’ is an adventure set in the early 1900 about a young man who suddenly realizes the sad reality that not only is he not of the family he has known throughout his existence and has grown to love so much, but also he is the only surviving child of a powerful clan (Chinto Clan) that perished in the hands of an immortalized warrior (Montana) who long pledged to annihilate the entire clan? With the resurrection of this ancient warrior, what is the fate of the young man? What enmity exists between the warrior and the Chinto clan? Are there other surprises he should expect?

Get answers to these and more in ‘Pieli-The rise of Montana’ this Saturday, 10th September at Global Cinemas. Tickets will be on sale at the cinema..

Global Cinemas is a multi-purpose and luxurious entertainment centre with three (3) cinema halls and seating capacity of 500. The cinema offers premium viewing experiences to cinemagoers in 3D and 2D with Dolby Surround sound and plush seating.