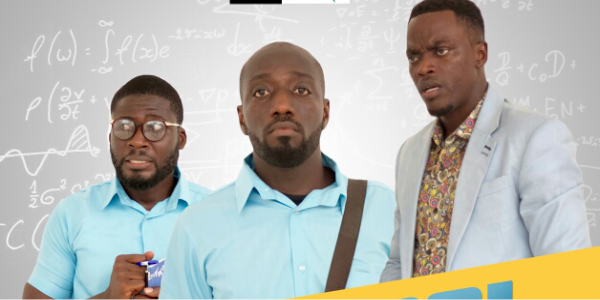 On 8th July 2017, the National Theater would bubble up with an exciting and thoroughly an exhilarating play titled the “NATIONAL SCIENCE AND MATHS QUIZ”
Strictly comical with a touch of educational elements, NSMQ will leave patrons completely intoxicated in humor.

The play which is produced by NYANSAPO PRODUCTIONS will be staged at 4:00 pm and 8:00 pm on the 8th of July 2017.
It will cost only GHS60 for single and GHS100 for double for each show, it is one comedy blast with a bizarre plot and constituent of intellectual comedy strips and humongous funny punchlines that would keep you at the edge of your seat from its start to end.
GhMoviefreak.com has learned; Organisers have stated that the play will once again blow the minds of patrons as did the ‘Gallery of Comedies’ organized in 2011; popularly known as the ‘Legon Comedy’ and ‘Flagstaff House’ staged at the Theatre in 2015.
“We opened the nation’s eye to a new definition of comedy in an eccentrically unique manner,” the Communications Officer, Faiba Bernard stated, adding, #NSMQ is set to quench the seemingly insatiable desire for Laughter of audience. The play is directed by the Nyansapo Team.
The play will feature Foster Romanus, Clemento Suarez A. K. A. Sarkodie Acheampong Auntie Mary, Prof. Delong, Robert Komla Mensa Ahlijah, Pearl Korkor Darkey and the sensational comedy duo ‘2 idiots’ – General Ntatia & Dr. So.
“Brace yourself for a non-stop, belly ache laughter till your stomach hurts even as you crave for more” Faiba indicated.
Nyansapo is collaborating with the National Theatre to produce play; Powered by Unibank and supported by Club Mineral and Food 101.

FROM SOMEWHERE WITH LOVE SET TO BE PREMIERED ON 24 JUNE 2017.