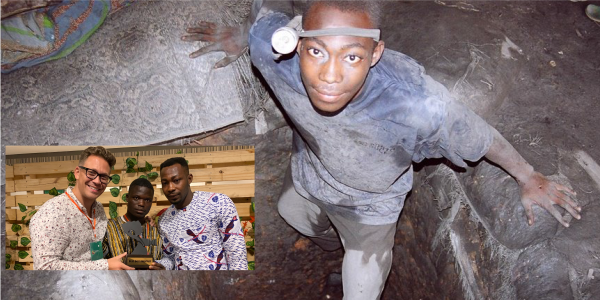 (Accra, Ghana) – American documentary film director Stuart Harmon has won the award for Best Documentary at the 2019 Black Star International Film Festival for his film, “The Money Stone.”  The film explores the controversial subject of child labor in gold mining through the stories of Justice and Maxwell, two teen boys fighting for their dreams among the deadly illegal mines of Ghana. The prize was given out at the festival’s Awards Ceremony on Saturday, August 24, in front of an audience of filmmakers, actors, industry stakeholders, diplomats, celebrities and public figures, including Samia Nkrumah.

‘The Money Stone‘ is ultimately a story about hopes and dreams.  There are thousands of Justice’s and Maxwell’s all across Ghana whose families just want the chance to find opportunity and build successful lives and are willing to work hard for it.  However, the difficulties of the mining licensing process, the negative perception of small-scale miners, and the criminalization of galamsey have forced many to pursue the job illegally, further exacerbating the problems with child labor, environmental destruction, and safety.  I truly hope that this award can call attention to how desperately the industry needs reform and can spur real progress in the formalization of the sector.”

The film was one of five documentaries in competition at the Black Star International Film Festival. Stuart and the film’s subjects attended and were involved in Q&A session after each screening.   During the festival the team also screened the film at the US Embassy in front of an audience of journalists, students, environmentalists and other stakeholders.

“The Money Stone” made its world premiere in October of 2018 at the Austin Film Festival and has since screened at film festivals around the world. In the coming months, the documentary will play at the Kansas International Film Festival, the Dumbo Film Festival, as well as several additional screenings globally.

Harmon’s previous work includes television and documentary programs for The New York Times, Vice, A&E, MTV, and CNN, among others.  He is the recipient of two Telly Awards.  The film’s co-producer Paula Ely’s credits include the award winning documentary “Vanishing Cultures: Bushmen of the Kalahari.”

Ghana’s First Ever Charity Driven Movie Set to Premiere at The SNAP CINEMA.