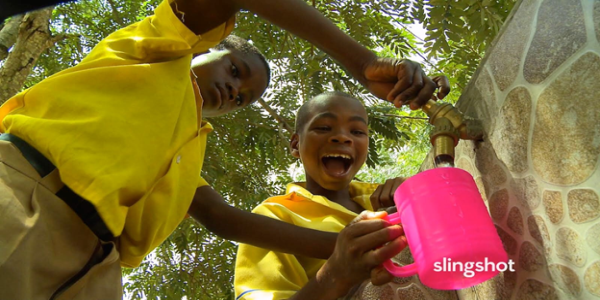 RWUL (Reel Worldwide Underground Link) is a non- profit organization that promotes independent film and cinema by hosting film festivals, film screenings, and educational film programs around the world.  This year RWUL presents: The Social Impact of Film – Special Screenings of SlingShot an acclaimed documentary film by Paul Lazarus. The film focuses on Segway inventor Dean Kamen, who has invented many medical inventions to help people in need, and the film highlights Kamen’s recent work to solve the world’s water crisis. The documentary film ultimately tells the story of one man’s vision and quest to create an innovative solution to a water crisis that affects billions of people. SlingShot is one of Kamen’s most important inventions that tackles the problem of cleaning up the world’s water supply, as 50% of all human illness is the result of water borne pathogens.  Certain scenes in SlingShot were filmed on location in the regions of Pakro and Adeiso in Ghana, West Africa. This documentary is a great example how film can be used as a media platform to educate and effect social change.

Two public screenings will be held and the film’s director and producer Paul Lazarus and producer Barry Opper will be present at each screening. The first screening will take place at Impact Hub Accra on October 20, 2017 from 7-9PM and the second screening will be on October 23, 2017 from 2-4PM at NAFTI Preview Theater.  The screenings are FREE to the public and each screening will have a special Q&A moderated by local Ghanaian filmmaker David A. Masterwille with the film’s director and producer Paul Lazarus and producer Barry Opper. For more information on Slingshot by Paul Lazarus visit the website: www.slingshotdoc.com or the Facebook: www.facebook.com/slingshotdoc and to view the trailer for SlingShot visit: https://vimeo.com/114286950 .  Two additional special community screenings of SlingShot will also take place on Saturday October 21, and Sunday October 22, 2017 in Pakro and Adeiso areas of Ghana, for more information on those screenings please email newafricanhealth@gmail.com for location and times.

The Social Impact of Film -Screenings of SLINGSHOT in Accra, Ghana