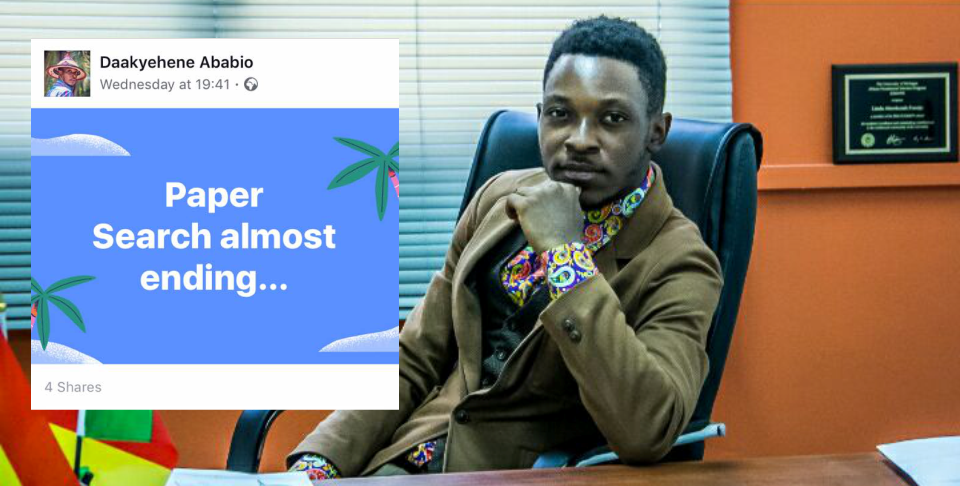 After the very successful Kumasi premiere of Daakyehene Ababio’s first feature film; “From Somewhere with Love” earlier this year, he’s been on our radar as well as that of many other film aficionados.

We’ve all been eager to see what next the young filmmaker has up his sleeves, film wise. His recent social media posts had been accompanied by the hashtag #PAPER or implying his search for “PAPER”. With many people interpreting it to be subtle hints of his next project.

The time for hints and guess work is over now. It’s officially been confirmed that “Paper” is Daakyehene Ababio and his Palmbook Studios outfit’s latest project.

An artwork been circulated on social media by Plambookers and their affiliates caught our attention today and pretty much confirms this. Paper is a new series directed by Daakyehene Ababio which stars Raymond Sarfo, Eddie Akwetey, Nii K. Saka, Anastasia Bright, social media sensation Teacher Kwadwo and a host of new faces.

In a conversation with Raymond Sarfo, one of the lead characters, he explained that, “Paper is a jargon/slang and it actually means money. Paper is centered on the daily lives of people from various walks of life. We wake up and work why because we need Paper(Money) to survive. There’s also the struggles of people who travel to the city in search for greener pastures, the struggles of unemployed graduates, dreamers, musicians and others. So, everyone is looking for it”

He further on revealed that the series centers on a drug Lord who uses his money to influence and lure desperate people to work for him in his drug business using them as mules whilst a young blogger takes it upon himself to uncover the darkness in the drug trade to bring him to justice.

There is no option than for us to conclude and anticipate that this is going to be a very eye opening and daring project from the young filmmaker and his team.

We’ve not been able to confirm when and how “Paper” would be officially released but we at GhMoviefreak are very much amped about it. As always, we would do well to keep you posted on this upcoming project and also furnish you with an extensive review once it’s released.