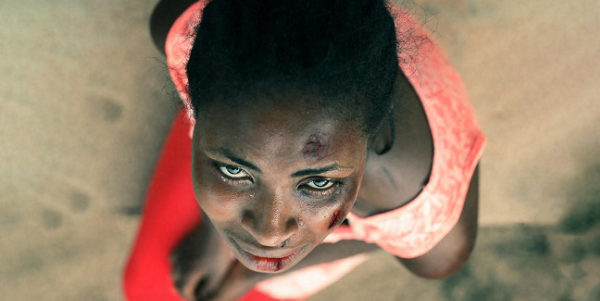 We’ve always argued that film is a powerful tool for delivering a message, especially one that seeks to move the masses to take a stance either positive or negative. Young filmmaker Dela Finn is using this power to champion the fight against domestic abuse with his short film titled “ABUSED”

“ABUSED” is a short film campaign led by Deland Films against violence against women and seeks to empower victims of abuse to speak up.

Day in and day out there are several people facing domestic abuse either from their partners or families. Only a few are able to speak up for fear of losing their lives or possibly being rejected by society and the people they love. The film finds a way to empower victims to speak up and not be silent when suffering abuse.

It uses an emotionally driven first person narrative approach to tell the story of a young woman who is abused by her husband and thrown out of their home in the middle of the night. Bruised and battered, she laments on her plight detailing her sacrifices and efforts to make her husband happy. She finds the resolve and strength to move on and transforms her life.

The strength of this film lies in its intent. It’s estimated 8mins run-time does not do it enough justice but the message is not lost at all. Although there is no accurate understanding or measure of how abuse affects anyone, you somehow feel the pain of the lead character (played by Joyce Everest) right from the opening scene. With well-done make-up and costuming you are drawn to her plight and share in her grief. And even as she finds the courage to move on with her life you can still identify with her emotional scars. In the end we are all encouraged by the narrative to empower victims to speak up on abuse.

Besides the film not being long enough to satisfy the thirst for well told drama and thrill, it also had some shortfalls in performance. The delivery from the lead seemed forced and appeared more like a spoken word piece than genuine lamentation or monologue from a broken woman. The voice over narration on the other hand severed its purpose and turned out more natural – hence complementing the feel the director went for with the film.

Overall, this film serves its purpose of triggering and sparking the very much needed conversation on domestic abuse issues and for that we would rate this film 3 out of 5 stars.

“ABUSED” although being a short is worth seeing and certainly worth having a discussing over after it ends. It has the potential to set the tone for the discourse that would not only encourage victims of domestic abused to speak up but also likely cause some reformation in perpetrators.

It’s certainly a film that would carry more weight should it be a feature length.  Be on the look out for “ABUSED” if you haven’t seen it. If you have, kindly share with us your thoughts on it in the comments section below.

Ghana’s First Sci-Fi Film; All You Need To Know About ‘Adam The First’

Here is A First Look at Abraham Attah in ‘Tasmanian Devil’.