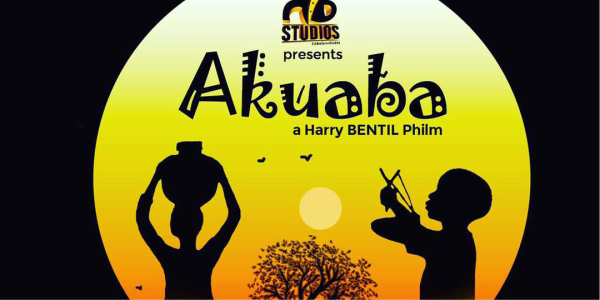 Summary has never been an easy task for English students. You can only imagine the burden involved in making a short film. The ability to make meaning out of simple details takes a lot of creativity mixed with hard work and bits of every spice in the art of telling a good story.  That’s the challenge of making a good short film.

Akuaba takes the form of a typical Ghanaian village life setting. It carries the truth of the stream life experience where women may encounter issues of harassment and rape on the lonely path while also highlighting the bravery of a dumb boy who rescues Akuaba from a rape attempt, which then develops into a deep friendship thereafter.

For a film that uses virtually almost no dialogue, the narration was very well executed.  At the end of the day a meaning is made of it’s almost 9mins run time.

This short film owns an identity, and keeps its uniqueness throughout, unlike the very usual setting these days where western influences takes a toll on our expression, making an intended plot of an African movie, somehow not African enough.

The visuals did enough justice at portraying the very essence of what a present day village looks and feels like. We also acknowledge the choice of music at the background of the film. It is an articulate and appropriate choice for the setting. It added to the feel, cultural setting and minor details of the film.

Though suspense was maintained, its intensity wasn’t felt much. If you failed at a prejudgment, then it was more of a prediction failure than suspense and so in other subsequent short driven movies, we  would wish to see a considerable amount of suspense at play.

Director Harry Bentil did amazing at pulling this one together no doubt.  In Akuaba, each character was well played, and though there was not that much use of spoken dialogue, each character’s essence was well communicated and we noticed it keeps a very steady pace, engaging the literal sense in the viewer.

It manages to pull a classic end. The kind that makes you want to see more and hope there was a the sequel . If there ever should be, we hope it carries the same vibe accompanied by the right set, correct costuming and  most importantly maintain its present day Ghanaian village setting feel.  We would definitely love to see more from this director based off the little we’ve seen in this short film.

Exuding good doses of suspense, bravery, jealousy and regret, this is certainly a film we would love to see in a feature length. We are always excited knowing that there are young film makers out there putting in some work, all for the love of film.

As always, we are happy to share with you this short film, Akuaba.  Check it out and also don’t forget to share.

Don’t forget to share with us what you also think of it as well in the comments section below.