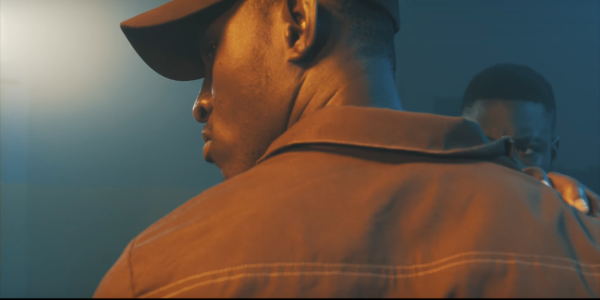 We finally got to see Pascal Aka’s much talked about “Corruption” as one of the short films that screened at the Kuumba Media Accra Meetup last Thursday. And like everyone who has seen it, we have a few things to say about it.

“Corruption” is a short film that follows an undercover cop who poses as a courier to collect stolen evidence on behalf of a corrupt government official from a group of thugs.

In a short frame of time, this film is able to subtly reflect on the extremes people in power are likely to go with their corrupt intents. Whiles edging around the idea of the need to be sometimes equally extreme in the much necessary fight against corruption.

In the film Alphonse Menyo who plays the role of Agyeman (the undercover cop) walks into the den of thugs and fights them squarely to secure the stolen evidence.

Alphonse Menyo teases the possible making of a future action star with the way he handles himself in this short film. He is able to communicate the right emotions in his lines and delivery whilst keeping a decent grasp on the fight choreography needed to sell his character. The film also features an acting performance from the writer and director Pascal Aka, in a role, although quite different, reminds me of the role he plays in his last film feature film, Interception.

An interesting part of this film is how it leaves you wanting more even though its satisfying enough. You are eager to know what Agyeman would do next and how the powers he seems to be fighting against would retaliate to his actions.

Alphonse Menyo & Pascal Aka in CORRUPTION (2018)

From a cinematic point of view, the film uses some quite interesting lighting and camera handling that gives it an intense crime feel. If you appreciate action and fight scenes, especially in Ghanaian films then this short film is for you. It does enough to whet your appetite on our industries prospects’ in the action film department in its somewhat meagre 8mins run-time. The editing and cinematography also  compliments the fight sequence excerpt for the bit were a character  appears to have been shot in the shoulder but is later seen bleeding from the gut area instead.

The sound score is engaging with some thumping hip-hop infused bass and synths in some scenes and then switches to African drum patterns in the fight scene that gives the film a more peculiar high octane feeling.

I feel this film deserves a 4 out of 5 stars for the thrill and adrenaline rush its able to pack in its short run time.This film carries more of a feeling than a just a message. A feeling that rehashes the plaguing existence of corruption and its extremes. Not that anyone even needs to be reminded of this problem but it somewhat feels good knowing that we can be a bit more creative in using our storytelling to subtly tackle some complex issues.

If you’ve seen “Corruption” do well to share with us your thoughts on it in the comments section below. If not, be on the lookout for when it’s being screened at any local our international film events.