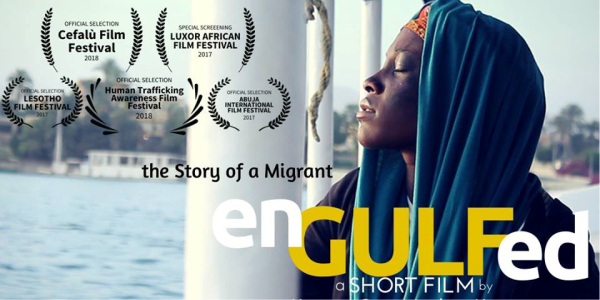 Film is a powerful medium for educating or indoctrinating people. What better way is there to generate a discourse than through this form of art?

That is exactly how we felt at the Antique Lemonade Gallery last Saturday night as invited guests to the Migration dialogues; a gathering of creatives, Country missions, agencies, film and media industries, academia

As part of the event was the screening of “enGULFed”, a film written and directed by Kojo Owiredu Kissi

enGULFed is an emotionally driven short film that speaks on the subject of modern day slavery being experienced mostly by young migrants from Sub-Saharan African to who embark on perilous journeys in search of greener pastures in Gulf Countries.

In the film we see a young lady played by Esi Yamoah being maltreated by her employers. She is raped and abused and confined in a space unsuitable for living.

Esi Yamoah channels the right emotions to drive home the message here in this film. A girl broken and engulfed by grief, captivity and possibly regret as well. Her only choice is to find the strength to escape.

The cinematography style used in this film combines first person point-of-view shots for both the victim and perpetrators to give us a look in to the psyche of the characters. The intensity is felt and you can’t help but find yourself re-living the same situation as the main subject of the film. Even in her escaped the viewer is drawn in by the narration each step of the way.

The short film set up the atmosphere for a health discourse at Antique Lemonade on illegal migration, the challenges, experiences and the possible remedies. Unfortunately for many young ladies and some men who also find themselves in such situations, they are not able to escape and die in captivity. The only remedy for this situation would be preventing people from embarking on such risky journeys. And that’s all the reason there should be for more films and discourse like this.

The film ended too quickly for us just when we thought the story had just begun. But did well to drive home it’s intended message and spark healthy conversations on the subject matter.  We rate it 3 out of 5 stars. We applaud the attempt and efforts put not just into the film, but also into the entire evenings event.

We would have loved to see more in this short film because of the subject it speaks about and our belief in the power of its message. This is definitely a film that needs to be seen by many. And we can only hope that a much lengthier and more potent film is made on the subject so as to be able to better deliver the intended message.

The Migration Dialogues is likely to go on tour with this film so be on the lookout for it and tell someone not to risk their lives embarking any perilous journey.

Short Film Review: “That Night” – With the Zylofon Arts Club