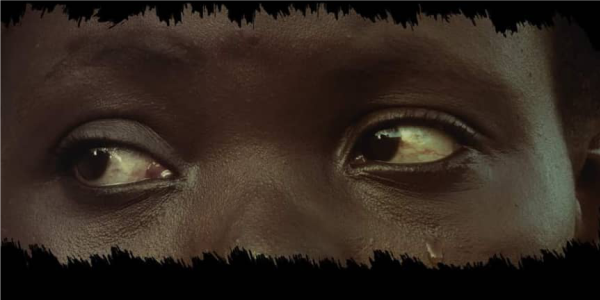 We were given an exclusive screening for “Nhyira” a yet to be released short film that speaks about rape directed by Fabrice Vodis.

“Nhyira” details a day in the life of a street hawker with a positive attitude. She goes through her day optimistic that better opportunities would come her way only for her to find herself in the hands of a rapist by the close of the day.

The delectable Mamley Djangmah is at the center of this short playing the role of Nhyria. She does not only deliver well in her performance but also fits the role perfectly. She shows strength even in her circumstance and oozes an aura of positivity that inspires hope. It’s clear she has the talent to match her beauty and we can’t wait to see more of her on the big screens in her subsequent roles.

The cinematography in this film makes use of detailed compositions and close ups on the subject’s facial expressions making her circumstance even more personal and intense for the viewer. And we really appreciate that a lot. For a film that doesn’t have that many scenes, it gives you enough to see and hold on to mentally.

We seem to feel the choice of sound score seemed too “western” influence for a film with an everyday Ghanaian setting. A more domestic theme or Ghanaian score would have added some more credence or authenticity to the emotions this film anchors on to.

The major let down for us was the inconclusive end that it has.  As is very typical of most short films, Nhyira leaves you wanting more and yearning for a better resolution for the story being told. For us we felt it should have ended on a happy/positive note considering the way it started off. Yes, the subject of rape isn’t a happy one but wouldn’t it help more if people who find themselves in such situations and inspired, encouraged or motivated not to give up by this film? We all need to see some light at the end of the tunnel or a rainbow after the storm to keep us going.

This short of about 11 minutes succeeds at reminding us that victims of rape are in no way to be blamed for this misfortune and don’t deserve to be stigmatized. It’s definitely a movie worth seeing more than once and worthy of a feature length.

Although we are not familiar with Fabrice Vodis’ work and his style of filmmaking we seem to find this film impressive and would love to see more from him.

From what we’ve gathered, Nhyria is likely to be screened on the film festival circuit so do well to be on the lookout for it and make sure you get see it if you get the chance. If you have already seen it, kindly share with us your thoughts and views on the film and its subject in the comments section below #fortheloveoffilm