Short Film Review: RUNNING …. “I Am A Child, Not A Bride” 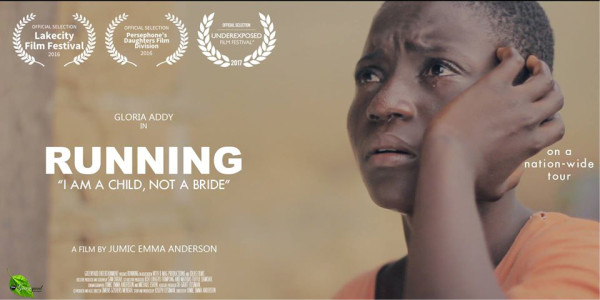 Child marriage has always been one of those issues that has troubled the Ghanaian social structure possibly, from as far back as the conceptualization of our very existence. Hence the continuous fight against it, even in our arts.

This short film written by Joseph Otsiman and directed by Jumic Emma Anderson aesthetically captures the fate of most young girls especially those who grow up on the rural areas of Ghana.

RUNNING captures, the story of 13-year-old girl Segua, who is to be forced to marry a 56year old man. Knowing the pain and suffering teenage wives have to endure in their marriages and fearing that she might have to endure the same faith, she runs away from home.

The film starts off with shot of a window slowly creaking open with Segua’s voice giving a narrative voice over detailing her life till that point. The window opens and she steps out and runs into the darkness for her freedom, but she isn’t really free because fear itself is a prison and till she really is safe, she can’t be free. And so she runs for her life and nothing would stop her.

The screenplay goes on to further highlight the reason for her escape with clear cut visuals and an emotionally driven dialogue between Sagua and her mother who also supports the idea of her getting married off.

Gloria Addy’s (who plays the role of Segua) powerful performance leaves you spellbound. As you could almost feel what Segua feels every step of the way. From fear, anger and then grief, her tears roll down her cheeks and you can’t help but think of all the other young girls who have had to endure similar situations in real life.

The choice of using a Fante makes the acting in this film even more flawless and believable. There have been several times where the essence of a performance in Ghanaian films have been lost in “modern” glamorized English dialogue.

The entire film doesn’t appear shabbily done like most Ghanaian shorts we’ve seen. It’s almost as if nothing was compromised on in the making of this film. The soft style used in this film’s cinematography still manages to capture enough detail and depth in the visuals giving it a more authentic feel. Then there is the sound which is crisp and clear with enough attention giving to ambiance and its contribution to completing a scene.

You can’t overlook the powerful message that this short film conveys and how it manages to tell it so clearly in its about 16 mins run-time. It goes straight to the point capturing all the right emotions without being too overbearing with a long winding story.

If you are still not convinced about the prospects and potential of Ghanaian films, we are sure this short film should be enough to cause you to rethink that stance.  It’s definitely a short worthy of a feature length.

If not anything at all, “RUNNING” gives us a look at the positive direction of Ghanaian films after the storm of mediocrity and lack of originality fully settles.