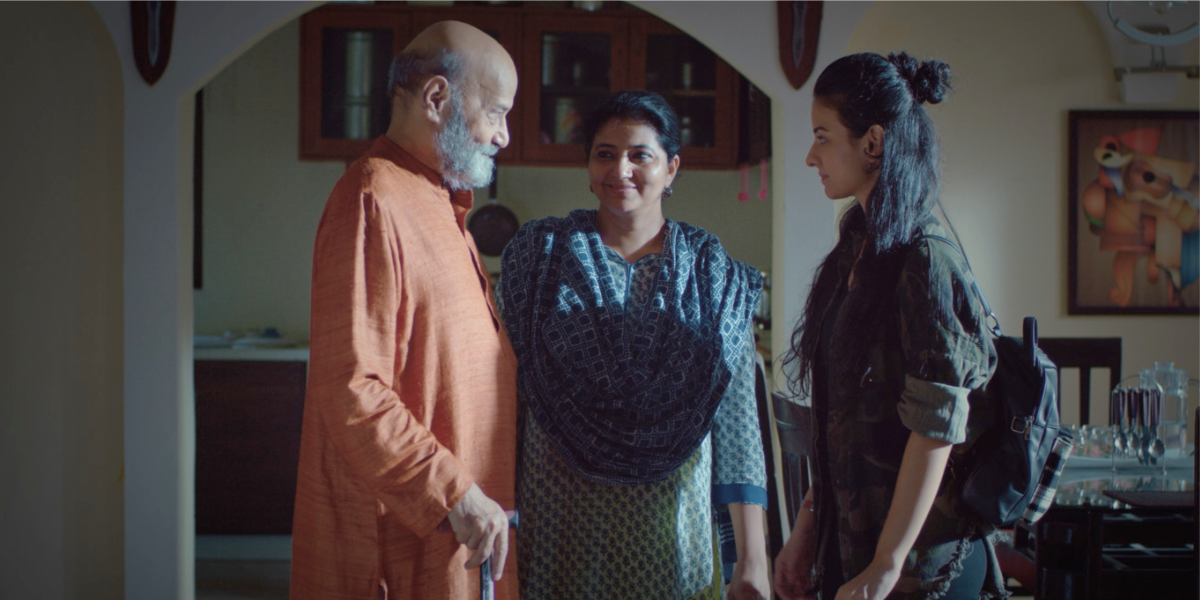 This short film which was part of the official selections for the virtual access edition of the Accra Indie Filmfest tells the story of Ishranth (Ram Gopal Bajaj), a disgruntled filmmaker who is haunted by his past life. His granddaughter, Natasha (Mahima Makwana) visits for a weekend after several years. She learns more about his past and whilst mending broken their broken relationship he helps him rediscover his love for filmmaking.

The film explores the dynamics of a relationship between a man and his granddaughter who share a common passion for filmmaking.

Although from the beginning it is made clear that there seems to be some strain on the relationship between Natasha and her grandfather. That was well captured in the awkwardness between then during their conversations but is not explored in great detail. I would have love to find out some befitting explanation for why they had not seen each other for 16 years or what exactly influenced or motivated her to visit now after all those years.

The film does well to explore and capture the significant change between the two era’s of filmmaking that Ishranth and Natasha each represents and how those eras influence their creativity. It also confirms that having a good imagination is still a prerequisite for being a good filmmaker in even in present times.

For Natasha, even as a vlogger she is very much concerned about making sure her virtual audience get to watch the best from her. A scene captures her struggling to get the perfect framing for a new video she is trying to shoot in the living room. Revealing that she too might have the traits of a perfectionist just like her grandfather.

As Natasha casualty reads through her grandfather’s diary, she begins to learn more about him and begins to probe further engaging him in conversations about his life and past work.

Ishranth talks to her about there not being any risk-takers in the filmmaking space and how no one seems to have the patience to create anymore. The film, however, failed to delve deeper into that even though that could be used reveal more about what appears to the current state of filmmaking in India.

The story is mostly set in Ishranth home. We get to see that even though he walked away from filmmaking, he seems to be leaving a comfortable accomplished life. His beautiful home is captured in a way the expresses emptiness and desolation reflecting the life of seclusion he is living. It is only towards that the end of the film that we see thing liven up in the home after his passion is re-ignited.

In its about 24 minutes runtime, you get the impression that writer and director Angad Bawa made this film to push the agenda of free speech in the arts. Ishranth is disgruntled because of the treatment meted to him after a film he made in his prime. Even whilst acknowledging that times have changed it takes the unique bond between him and his granddaughter to real him back into the director’s seat.

The idea of making this film a short does a great disservice to the story being told as its runtime doesn’t allow for many of its themes and subjects to be explored in much greater detail. It rushes through the first and second acts delivering a climax that leaves you wishing more had been explained in the film.

I would rate this film 3.5 stars out of 5 nonetheless.

For any creative feeling uninspired or not motivated to create, Take 2 is a film that is likely to rekindle that spark and help on the journey of reviving the creative spirit. Albeit it is a short drama… it packs enough to stress the importance of filmmaking, its power to convey strong messages and its greater potential to do more for humanity than just serving as entertainment.