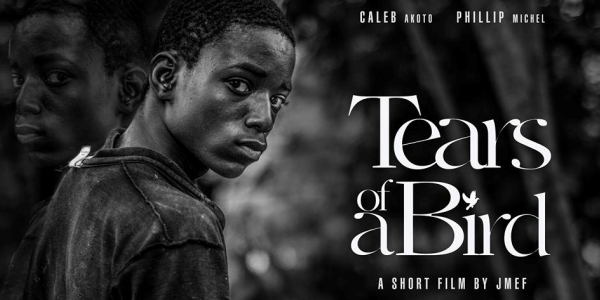 Film is one of the best tools for speaking the truth about situations. Sometimes in the simplest and blandest of ways. This short film speaks on the truth of stigmatization and maltreatment of people living with HIV/AIDS. Truth about a situation that shouldn’t be existing at all but still is. Even amongst people who should know better.

Tears of A Bird follows the life of a young Fiffi (Caleb Akoto-Bamfo) neglected and rejected by the society he lives in after the death of his parents and younger brother through AIDS. With hatred and death being his pavement of life as he lives in its world of stigma, staying clear of everyone till he meets a stranger who shows more concern than he had ever experienced.

What makes this short film potent is its subject and simplicity. Sometimes we need to be reminded of these same things we should be fully aware of. Stigmatization is really a thing even if we pretend that it isn’t and surprisingly, we all are culpable of it in some way or the other.  We fail to show love and affection towards the people who need it the most, especially the disabled and destitute.

Fiffi is shunned by everyone him that he begins to hate not just himself but the people who even attempt to be kind to him.  It’s almost as if he had given up on life and humanity in general. But one person’s efforts go a long way to reel him back into a world of hope and belief in the kindness of humanity.  And that is usually the case for most people facing stigmatization for any reason. All they might need is just one person to offer a helping hand. And that one person can and should be all of us all the time. All we have to do is to let love lead.

Production wise, this film uses decent cinematography with close ups and some silhouettes to tell the story. The strong sound score underlays most of the visuals and provides the emotional steer and mood for the film. The dialogue on the other hand could have been better done. The ADR felt out of place with the alternating dialogue from the characters having a conversation appearing to be on different sound levels.

You can’t ignore that strong performance from young talent Caleb Akoto-Bamfo. It is quite impressive how he is able to pull the right facial expressions and delivery needed for his character. An emotionally broken and distraught young individual.  We hope such young talent does not go to waste. We would keep an eye out for him and what else he gets the opportunity to feature in.

We would rate this short film 3 out of 5 stars for its compelling message. We are looking forward to seeing another stuff from the director/writer Joseph Mensah Fiamaple. We were impressed with this just as his feature film shot in Sierra Leone, ROPOLI (Look out for the review on that soon).

The attempt and intend of this film can’t be missed even on the surface of it. Love and compassion for everyone matters, especially for those who need it most. Tears of A Bird is a short worthy of a feature.

Watch teaser trailer for Tears of A Bird below,

Short Film Review: “That Night” – With the Zylofon Arts Club