Stage Play: What Happened To Courtship? - A lot! 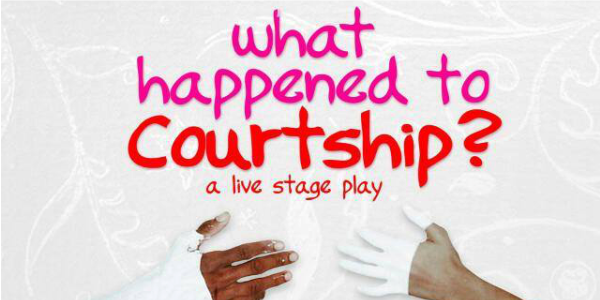 We have come to appreciate the uniqueness of the variants of scripts, directing as well as production styles that we are getting exposed to in this industry. It shows that the industry is indeed on the rise and things are certainly getting much better with time.

We would not hesitate to appreciate Page to Stage production’s distinctiveness when it comes to stage plays which we observed at their maiden Accra production last night.

The musical stage play, What Happened to courtship written by Akwasi Nyame – Tumi, is about two teenagers in senior high school who believe to be each others soul mates and are dead set at pulling all odds to strongly pursue marriage at their very young age. The two must learn things the hard way when they attempt to face and triumph over the schemes of their parents which are intended to prove to them that with only time do we learn to appreciate the true elements of love.

This first chapter in the series of twelve plays from the playwright packs enough humor to almost blur out the seriousness of the message being laid out by this play. But it eventually exposes illusion from reality, and makes you realize maybe we need this more than we actually imagined – Marriage isn’t a fantasy. So the question really does deserve to me asked and answered, What Happened to Courtship?

Co Directing  from Solomon Fixon Otoo, was not far from accurate, the script was acted out clearly with the strengths of each of the casts. Prince Amoabeng (Jeneral Ntatia) and Pearl Korkor Darkey who played the roles of the young high school lovers (Kobby and Kukie) were excellent at exuding immaturity, inexperience and poor sense of judgement that their characters, needed to portray.

Prince Amoabeng does a good job bringing out harmless rascality as a teenager who is all about himself. Pearl Darkey clearly stood out as the most powerful tool in the cast with her expression of an immature spoiled teenage girl who is cares about nothing excerpt getting things her way.

Unapologetic wit and naivety was in good display from these two who were the center of the play and it was quite entertaining to watch.

Naa Ashorkor who plays Mrs Dzata, Kobby’s mother exhibited her usual eloquence and finesse she is best known for when it comes to her being an actress. She did hold down her character exactly like she was supposed to.

We were only a bit disappointed that Adjetey Anang’s character (Dr. Dzata, Kobby’s father) did not allow us to see more of him. We strongly feel he was underutilized in this play as his appearances and lines could easily be counted by the audience. As much as we would have loved to have seen more from him, we also acknowledge that the script carefully anchored him and did allow for all the other cast to share the spotlight and grace us all with their talents.

The play did not stray away from its intent to be a hilarious Musical at all. The effort to include original compositions as part of the the performance can not be ignored. We can’t downplay the importance of music when it comes to stage plays and it’s contribution to communicate in details what the art is all about.

As much as we would have loved to have seen the rest of the cast sing as well, Richmond Oppong Frimpong and Millicent Kumi impressed us with their roles and their singing.

Although the addition of music was perfect we were not too happy with some of the choices as we saw and heard quite a number of unrelated picks. We could not associate some of the songs with the scenes they were fixed in. We feel much more better picks could have been made to find some songs that would best complement the scenes. Production wise, the quality of the band and the uncompromised sound mixing on at this live performance did help us appreciate the singing in the play some more.

We also observed the attempt to include a religious theme or accent to the play which we consider to be very impressive since we do agree that God can never be let out of any aspect of our lives. This was easily identified in some of  the choice of songs.

However we seem to feel the blend wasn’t well captured and in some ways might have caused some confusion. The idea of courtship suggests more of fantasy and illusion in contrast to being relatively realistic, wise and matured. And we seem to think the right choice of songs could have helped carry more weight in that respect other than it did.

We were also not comfortable with the age range chosen to communicate the misconception of marriage or courtship, we felt this was quiet ineffective. Maybe its an issue of background and different exposure but one would easily associate this idea of courtship  to the early to mid 20s who we see these days courting in all inappropriateness only to later find themselves in marriage situations they were not fully prepared for. But that is a matter of individual diverging opinions that can be ignored as it does not take anything much from the quality of this stage play.

This was certainly an awesome play that covers many relatable aspects of courtship that we would strongly advise all parents and youth of all ages courting of not to go and see. It does that good job of questioning your judgement on ones readiness for marriage be it mentally or emotionally and awakens your thoughts on the subject matter further beyond the illusions and fantasies.

We would score this a 7.9/10 as we are expectant of the potential growth and blossoming of this new production team. We are in no doubt that we are are going to see more of this awesome story develop with the next chapter the the playwright has in store of What Happened To Courtship.

Considering this being the first piece of the playwright’s 12 chapter series we can only anticipate more humor and much more depth for the characters as they expected to mature.

Stay prepared for the next play in case you missed out on this one.

Do well to share your comments, opinions on this stage play in the comments section below.

Stage Play: The Queue, He who jumps the queue dies first