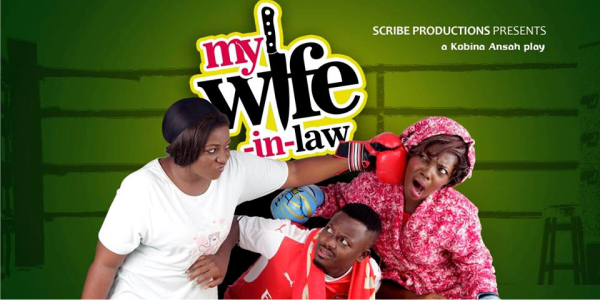 Three was certainly no crowd last night as our very young and own playwright Kobina Ansah sustained us with an awesome 2 hour stage production that was more than enough to keep us entertained.

It was a beautiful act, an impressive humble beginning and for that matter if only Scribe Productions would further this pace, Ghana theatre would stand the test of quality and its patronage would grow.

‘My Wife in Law’ is a 3 cast play that follows the life of, Baaba a desperate wife in a not so perfect marriage who invites into her marital home, her mother with a history of snatching husbands to help solve her marital problems.

Things get worse for the couple as Baaba’s mother ends up trying to seduce Yoofi, the husband.

It’s always more than satisfying when a playwright is able to successfully use humor and drama to tell a difficult story.

Following the publicity, it was joy to see the play delivering as promised. Humor was in its right proportion, enough of it to keep the audience glued and never bored.

Our momentum was pulled down unsatisfactorily for a brief moment because of the technical hitches that attempted to ruin the production but kicked in with the presence of Millicent Nana Aba Tetteh (Miss Wellington, Baaba’s Mother), who wowed us with her role. We wouldn’t be surprised to see her on the intentional stands someday. Kobblah and Jenny (husband and wife) did amazing too.

Usually during a live performance we see inconsistency with regards to the energy it started with and being able to hold up the pace to the end. But this play succeeds at being able to keep the audience along for the ride right through to the end. The blend of the choice of songs and the relation of the lyrical content to each scene or act was applaudable.

The costuming was well coordinated for the characters and it had all its intended communications, implied and expressed appropriately.

This play has a lot to laugh about and also a lot to learn from. It hovers on why whatever happens in a marriage should stay within the marriage especially if things can be resolved by the two parties involved.

Although we appreciate the very natural domestic feel the play exhibited we felt some scenes were quiet exaggerated and dragged a little bit more than we thought they should have.

Although the lyrical representation was good, we were not so impressed with the voices and instrumental alignments as there wasn’t always a great output.  We feel that much better could have been done. Perhaps the focus was on the drama but since we were in for both, it would have been more fulfilling to have been served both in excellent proportions.

Even the rains couldn’t stop our watch last night and that was because Kobina Ansah gave us something worth getting wet for. The play was able to fuse great marital lessons and positive influences as to how a good marriage can last.

We would rate this production an 8.5/10. It was worth our time, our focus, our intelligence and every treasured expectation we went in for.

If you missed the experience, you need to forgive yourself by the mention of the next play by Kobina Ansah. We are all waiting for his next. Make sure you don’t miss out on the next play from Scribe Productions.