Stage Play: The “Prison Graduates”- As told by April Communications 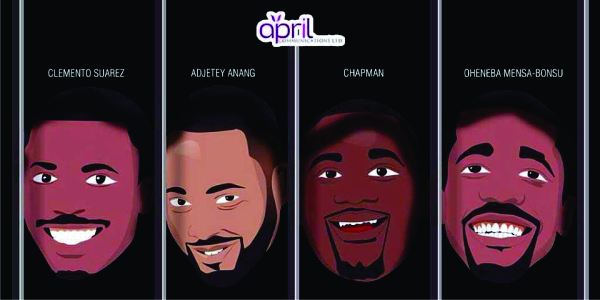 We certainly had an awesome time last night at April Communications’ latest production “Prison Graduates”. This would be their third consecutive production we’ve gotten to see and as the saying goes… “It only gets better with time”.

For us we are excited by the idea that the average Ghanaian is getting more and more comfortable patronizing stage productions and it gives hope to our theater and creative arts industry.

Our experience with the “Prison graduates” turned out to be exactly what we had expected it to be. An entertaining night filled with so much humor and laughs that we forgot the stressful couple of weeks we’ve had.

This play was written by Efo Kodjo Mawugbe and actually won a prize the English as a 2nd Language prize at the BBC World Service and British Council International Radio Playwriting Competition 2009. It follows four men trying to make their way in the world after being released from prison in Ghana. They explore their many options, as they try to decide how best they can get to their lives back on track after finally tasting freedom after many years in prison.

The play starts off with our four main characters being released from prison.  As they gradually sober from their celebration of their new found freedom. They are suddenly pressed by the harsh realities of the live they are likely to face as ex-convicts in modern day Ghana.  With humor and with our characters navigate their way through a mosaic of everyday situations that reflect the sometimes backward thinking of us Ghanaians and are reactions to social, economic and religious issues.

You would be impressed to know that this play flows from start to finish with no intermissions or change in acts from start till finish. This one-act play over it’s about 90mins run time  incorporated references from  the current English Premier League table standings, the 2017 Vodafone Ghana Music Awards, Ghana’s 2016 general elections right  down to some recent newspaper headlines.

It also highlights situations in the country like people paying huge sums of money to go abroad to seek greener pastures, and our  hospitals’ cash and carry approach to distributing health care as well as the situation of some churches and men of God taking advantage of their vulnerable congregation.

Fiifi Coleman applied his directorial touches to it to make it reflect the present Ghana well enough.  This was flawlessly achieved as the play managed to touch on almost all the trending social, economic and religious issues relating to Ghana from as far back as any of us in the audience could imagine to very recent times.

The play stars Adjetey Anang, Clemento Suarez, David Chapman Quayson and Oheneba Mensah as our four prison graduates.  There was never a dull moment on stage from start to finish as they each utilized their individual acting talents to collectively entertain, educate and inform the audience right through to the curtain call.  By the end of this play we couldn’t dare think of any other four guys we would have loved to see on the stage as our prison graduates.  Adjetey Annang, (who happened to be in his  100th play last night) the veteran amongst the four severed as a good anchor subtly holding down the entire performance whilst Clemento Saurez and Chapman took turns being very humorous in the interpretation of the various persona’s they had to enact.

This play relies heavily on the audience’s imagination to understand and relate to situations that ponder on political, economic, religious and family strives. It not only entertains you but also awakens you to the truth about our backward thinking nature as Ghanaians being a significant contributing factor to all our struggles as a nation.

Although there were a few scenes we didn’t quite understand the need for (like the cast coming down from the stage to actually beg and collect money from the audience) that sort of ruined the mood set by the progress of the play at that point, we actually enjoyed this hilarious political satire a lot.

Our biggest disappointment on the night however was the plays late start.  The 7pm advertised play started at around 7:45pm. Although no reason for the late start was given, we assume the delay was deliberate to make sure a lot more seats were filled in the auditorium before the start of the play. It’s about time the general Ghanaian attitude of being late to events is harshly stumped out with production outfits strictly sticking to advertised showing times.

If you missed out on the Prison Graduates last night you have enough reason to beat yourself down for missing such a fun experience. Be on the look for when next this play would be staged and make sure not to miss out on this exhilarating fit of the acquired prison traumatic syndrome.

If you did get to see the play as well last night kindly share with us your thoughts and views in the comments section below.