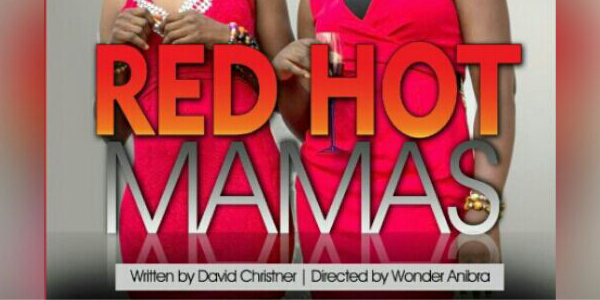 It’s exciting to know that there are a young crop of talented folk out there who love the theater arts are ready to give their all to ensure that stage productions are kept alive in this country.  Last night, we witnessed the opening night of Red Hot Mamas being staged by IV Productions and it was indeed an opening worthy of recognition.

This play talks about Abby and Dan a successful married couple whose children are grown and out of the house. The peace and quiet they are so eager to enjoy, however, abruptly changes when Abby invites her newly widowed mother-in-law, Sarah, to move in with them against Dan’s wishes. Her own mother, Claudia finds out of the arrangement and tactfully plays the guilt card on Dan to get her also move in with them. With the two mothers not seeing eye to eye, they must find a way to either live together peaceful or have their own children dictate and determine the way they are supposed to live.

This adaptation of Red Hot Mamas opens with Sarah grieving after the funeral of her late husband. This opening act sets the play off with an emotional under tones which carefully switches to good exchange of chirpy responses between the cast. Again it manages to trigger some emotions when Sarah shares the story of her neglected childhood.

The performances were flawless from each of the casts as they sufficiently delivered on selling the roles they had to play. It’s refreshing to know these talents would not be put to waste. The characters are believable and not just objects of humor positioned in everyday relatable situations.

Although this play did not turn out to be outright in-your -face kind of funny, the comedy and humor was evident in-between the lines. The intellect in the dialogue is enough to keep you attentive and engrossed in the play as it progresses. It’s more about wit and wordplay and not just raw uncensored humor, although the play’s theme could have easily made use of the later which could have possibly ruined the mildness and family friendliness of this play.

Also, we think that the makeup and costuming of the mothers could have been better done to reflect a bit more of the age class those characters belonged to.  A clear distinction between the age group of the couple and that of their mothers would have better showed absurdness and inappropriateness in the behaviors of these daring old women.

The timing of the acts and intermissions were well coordinated and there wasn’t any unnecessary waste of time. This made the play more fluid and pleasurable enough for anyone in the audience to forget time and just enjoy the moments unfolding on the stage.

This plays does well on enlightening you that life can still be fun even in old age as long as believe that you deserve to be happy and the only way to achieve that is o believe that you actually are your own source of happiness.

For a campus production, this stage play was well put together and we were really impressed with the total output. If anything at all this production does deserve to be on a much bigger stage. Eventually, it would someday.

We strongly recommend that you make time to go see these Red Hot Mamas live in action either tonight or tomorrow (7pm each night) at the Efua Sutherland Drama Studio at the University of Ghana, Legon.

Stage Play: “Rejected” Another One From Uncle Ebo Whyte