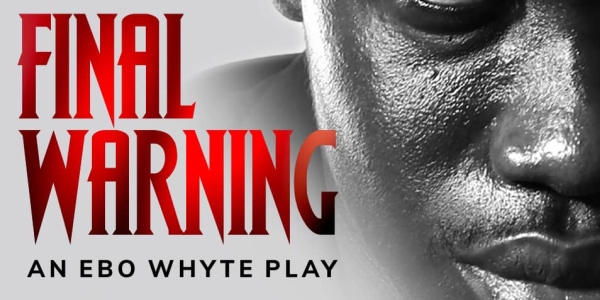 This play toes the line of NICHOLAS, another one of Uncle Ebo Whyte’s plays that was staged in November 2017 (read our review for it here) to detail the life and journey of Archbishop Duncan Williams.

Final Warning details the life and ministry of Pastor Samuel Korankye Ankrah the Apostle General of the Royalhouse Chapel International. Another man of God who is revered and admired by many. He too has unique story worthy of being told and known by many.

Born into a loveless marriage and a dysfunctional home, with a bleak outlook for his future, Samuel attempts to transform his future and that of his family having blind faith in God. His rise to success sets him on a different path until the ‘final warning’.

The play starts off with the man of God in his adult life being visited by two spirit beings at his home. As they debate over if he had lived his life well enough to the glory of his maker, they decide to have a review of his life to help determine if he had lived it to his full potential and made good use of all the opportunities he might have gotten in life.

The play puts necessary details about the man of God’s life into full perspective. Like many of us, Samuel Korankye Ankrah was born into a poor home with a bleak future. We get to know how is mother was forced into a marriage she wasn’t interested in and how that affected his upbringing. We also learn more about his temperaments and traits of his persona and how that might have affected the rise of his ministry. With a troubled childhood, his imperfections grow to become his strengths and his faith in God turns his fortunes around.

His is a story that inspires and reminds us of the need to trust in God’s voice and his direction for our lives. His faith leads to him appearing radical in how he handles some of the situations he is faced with.

The staging of Final Warning required the use of several characters to effectively tell the story. The acts and scenes get a bit complex and fast paced at times and could be difficult to follow if you are not pay enough attention. It is quite impressive how all the actors who severed as extras on the stage were used in depicting various situations that happened in the life of the man of God. The actors almost seamlessly transition into playing different characters from different happenings all relevant to the details that this play sought to highlight. It gets messy and almost chaotic and very fast paced on stage at some points but there is still clarity in the direction and the story being told. The buildups to the high points of the play are well laid out and when it reaches a crescendo you can’t help but savor the moment that could either be accompanied by roaring laughter or a resounding applause from the audience.

Final Warning also served as a solid avenue for the Roverman Productions team to outdoor the new talents that had been discovered from the last auditions they held. There is no doubt that these talents are in the right place as they all contributed immensely to how well this play turned out. We are excited to see how these individual talents stand out in subsequent productions as they take on more challenging characters.

It is amazing how the endearing story about the life of such a renowned man of God could be told with this much humor and wittiness without leaving a taint on his reputation or achievements. We will rate this play 4 out of 5 stars as it turned out to be inspiring and entertaining whilst honoring the legacy of a man worth celebrating.

If you appreciated the complexity of the NICHOLAS stage play then you would love and appreciate this one too. This is another one of those plays you need to experience for yourself. Final Warning is showing again at the National Theatre on Friday March 6th, Saturday March 7th and Sunday March 8th at 4 pm and 8 pm on each day.