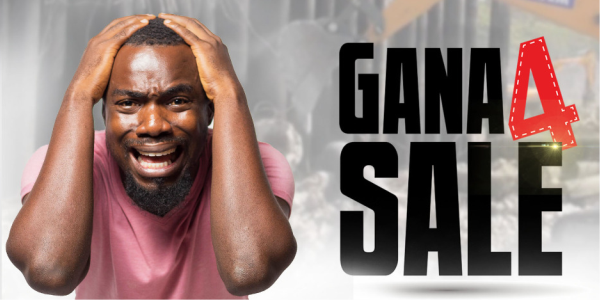 Satire makes it easy to address some of the most difficult subjects in society. And we witnessed that in full effect over the weekend at Nyansapo’s Productions latest outing ‘Gana 4 Sale’, a comical piece that tacked issues on governance and economic hardships.

The play details the lives of four street hustlers, Akomea, Amakye, Richard and Oppong who are frustrated by the economic hardship in the country. Their prayers complaints to God are heard and they wake up one morning as the rulers of the country with a chance to either make things right for everyone or just themselves within four years.

Richard, who appears to be the most composed and level headed amongst them, is the first gentleman of the country. He announces his 3 compatriots as the only cabinet he needs to rule the state and proceeds to push the idea of citizens selling the country. But his massage is taken wrongly by his cohorts and they begin to sell off the country at any chance that they got.

The play satirically highlights the current state of the nation as state institutions are either being privatized or sold off. It also reveals how some government officials put themselves first before the people they have been elected to serve. It also goes further to outline the gloom that can befall us as a state if care is not taken.

Power indeed corrupts and we get to see that in this play. All four of the friends changed once they found themselves in living better lives. They seemed to have forgotten about all the right they believed they would do if they had the power to and turned out to be very callous and dispassionate to others.

For us it felt like the energies of these actors were surprisingly low then we have usually seen from them. Perhaps it was how this play was paced or intended to be. But as it is expected from these comedic actors, when the jokes and puns hit they landed hard and were welcomed with laughter from the audience.

We would rate this play 3.2 out of 5 stars. It successfully preaches patriotism and a sense of ownership through the humor. The message is loud and clear yet not forced on you.

We can sell Ghana once we all make conscious efforts at projecting the positives, our strengths and the beauty of our diverse cultures to the rest of the world. All in the bid the better our fortunes and also to increase the standards of living for everyone.

The play stars Daniel Kojo Delong, Dr. So, Jeneral Ntatia and Foster Romanus at the center of all the action. With William O. Lamptey, Mawuli Jasparo, Efua Dell and Naa Bioh supporting.

Again we applaud Nyansapo Productions for another solid play. We can only spur them on to keep scaling over the hurdles to bring us more productions.

You can also share with us your thoughts on the play ‘Gana 4 Sale’ in the comments section below if you have seen it.