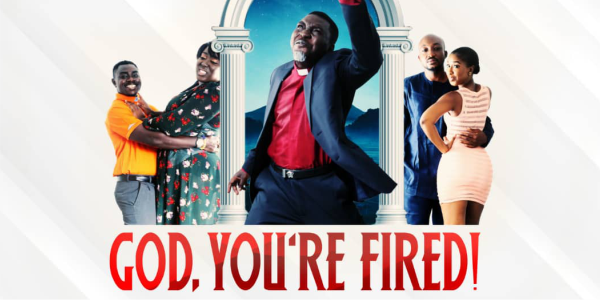 The year is steadily creeping to a close and as has become almost tradition for us,we got served with the 4th quarter play from Roverman Productions; a fantasy comedy titled ‘God, You’re Fired!’

In this play, a struggling pastor with a frustrating marriage and a small but very demanding congregation at his wits end decides to call it quits as a man of God. To him God doesn’t hear his prayers, so he results to ‘firing’ God from his life. But he is visited by a strange man who grants him the chance to be God for an hour, with un limited power he must the burden of having to listen to the prayers of all his congregation and answering them.

The play goes on to detail how the Pastor chooses to use his power and also foreshadows what extremes his actions and inaction could have on the community he lives in over a period of 48 hours.

Playwright Ebo Whyte admits that this play is inspired by the popular Hollywood film Bruce Almighty (2013). Except that this play feels very much Ghanaian with situations that are very close to home for anyone who goes to see it. Each of the characters that make up the pastor’s congregation has something that they have been praying dearly for and would give anything to see those prayers answered. Even if it is at the expense of others close to them.

This really is a true reflection of society and how we all have different needs and wants. There are those praying for love, those praying for their businesses to grow and there are those also praying for the downfall and failure of people they would consider as enemies. What would the world be like if all these prayers are answered? This play puts this into good perspective with the typical entertainment and humor that Roverman Productions have become accepted for.  And even as you enjoy the performances, you still find yourself pondering over what the world could really be like if all our prayers are indeed answered.

Certainly, there would be chaos as humans can never be satisfied and we all want different things that mostly likely conflict or contrast the prayers of others.

Perhaps, it won’t be mundane to say that Ebo Whyte must have missed his calling to become an ordained man of God. And you can assume that from the way his plays are heavily Christian themed. Or perhaps he is indeed heeding to that call and evangelizing to us through his plays. Each one seeming like a well put together sermon with illustrations and touching ministrations.

‘God, You’re Fired!’ delivers on another unique experience to reflect over some of the mysteries of life whilst also subtly drawing our minds to the importance of unflinching having faith and trust in the creator and his plans for our lives.

Michael Akoto Sasu plays the role of the Pastor in this play and he was flawless at it. His delivery and personification of a broken/frustrated man of God matched up well with the switch to a power drunken narcissist. His overall performance as the character at the center of the play was such a delight to have seen and certainly something that should be seen by many.

The entire play unfolds in the confines of the Pastor’s church premises detailed by a well-lit simple set design that could accommodate all the hilarious antics and dance moves the characters in this play had to offer. The carefully cued echo sound effects deployed on some portions of the dialogue from Gabriel and the Pastor theatrically accentuated what you imagine would come with the voice and power of God. Making the entire experience even more intense and satisfying.

We would rate this play 4.5 out of 5 Stars for the quality of acting the strength of the message it is able to deliver even with all the humor.

We agree that there couldn’t have been any better way for Roverman Productions to round off the year than another well thought out play that pushes you to be more appreciative of every answered prayer whilst reminding you to have more faith in God.

If you were at any of the showings of ‘God, You’re Fired!’, share with us your thoughts on this play in the comments section below. Also make sure you encourage someone else to go see this play as it showing again at the National Theatre on Friday, 6th of December, Saturday, 7th of December and Sunday 8th of December 2019 at either 4pm or 8pm on each day.

Also be on  the look out for details on Roverman Productions’ Festival of Plays 2019.