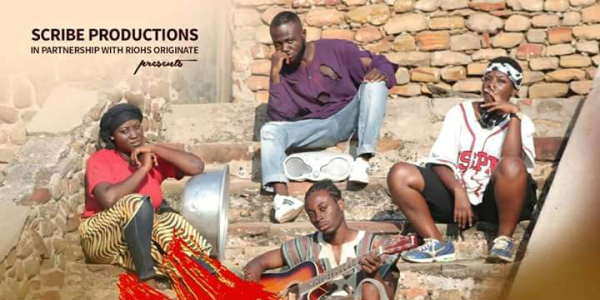 If you’ve ever been thrilled by a product of a known production, nothing stops you for going for it!

And for the very fact that stage play on any day is relatively demanding and requires dexterity, even the initiative to have a commitment of doing so must be commended. Writer and director Kobina Ansah has our applause by being consistent at this.

We were impressed and very proud of our own.

The weekend had a full house occupied at Tribeless which was staged at the ETS Drama Studio, University of Ghana Legon . It basically explains how hard life was for four individuals that had come to be one family bonded by their hustle and frustrations amidst poverty. They struggled to make ends meet taking up what we may call the “hand go hand come trades”. Eventually, their hidden talents that had been shielded for long is made bare as they sign on to some talent hunt and persevere to the end.

Though, the start time for some of the shows were not exactly prompt, it was still within time and we commend Scribe Communications for the good work.

Tribeless had a cast of 4, yet we see a wholistic life affair on stage where our imaginations didn’t have to suffer to understand the links and other “ghost” personalities they engaged.

All 4 casts were good at their game. We see real talents, very great skills and more than one art to celebrate in the individuals. These made Tribeless!

And at one point in time, each would steal the show making it difficult to call one the best actor/actress. However, we say Millicent Nana Aba Tetteh did great acting as a typical tom boy and bully in her role as a trotro mate, Gadafi. Special mention to Charity Bosomtwi and Richmond Darkwa who could effortlessly keep an outstanding northern accent all through the play as they stared as Fuseina and Fuseini:  two sibling migrants hoping to make ends meet.

The story leaves us with great lessons, encouraging as that with togetherness much is achieved. It also exposes the effect of betrayal and greed, as Eugene Speaks, our known spoken word artist who cast as the music guy and in all ways held the team up with his rap skills left them to pursue his own eventually falling prey to fraudsters.

In as much as the musical interludes, the blend of music and the drama, the dance and all arts held up the play to be outstandingly entertaining, we think it gave it a longer duration which made the play lag to an effect and maybe next time, Scribe Communications can work on the length of these afore mentioned to be able to keep the play within the 2hr range just so audience don’t lose interest getting to the end.

Again, I know with time, and good sponsorship of our own theatre works, Scribe Communications can put up a better stage work in terms of the design and partitioning. I should say, it wasn’t entirely a good sight having a grand visibility of the movement on and off stage for the different scenes by the stage handlers as they set up the background effect.

On a whole, this was a pot full of lessons, humor, music and really good art and we trust how far Scribe Communications will go with this. The script work was accurate, and not just for the play but even the lyrical contents of the raps and songs.

We would gladly rate this amazing production 4 out of 5 stars.

Tribeless is showing at Kumasi CCB auditorium on 21st October, if you couldn’t see it here in Accra, you wouldn’t be disappointed joining a bus just for this show!

Make sure you tell us what you think of Kobina Anash’s TRIBLESS in the comments section below.