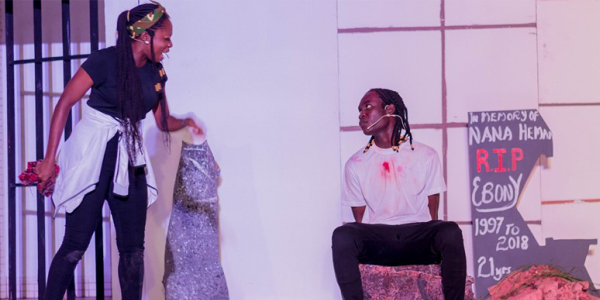 Wednesday theatre is on at the folks place at the National theatre on every last Wednesday of the Month. This week we got to see the staging of ‘Love’s Acne’ a play written by Venessa Tenkorang and directed by Nana Affum Berima.

The play is a tragedy that talks about a failed relationship and the secrets between a young couple that pushed them to hurt each other. Venessa Tenkorang and Afotey Nii Odai  are at the centre of the play with the characters, Francis and Maafia. They played the roles to the best of their abilities and delivered well enough, considering that this is the first time we had seen either of them on stage. They succeeded at impressing us.

Maafia, feels hurt the most in the relationship and even after a year of break up she devices a plan to have Francis captured and brought to a grave yard. In the course of the play, they both reveal so much about each other and events that led up to the split as well as the details of the sour love hate relationship that exists between them. She is clearly at her wits end and ready dish out an equal measure of pain she believes to have suffered in the hands of someone she loves, forgetting that she too contributed to it all. They both learn to see the situation from each other perspectives and realize that they are both complicit in the hurt and pain they each endure.

The dialogue from the characters is strong, vile and heart piercing. We feel the emotional pain of the characters, we share in their disappointment and also understand their disdain for each other.

A cross section of the audience at Love’s Acne.

The play is interspersed with some beautiful, powerful spoken word pieces that are delivered in the form of a monologue by an unidentified character. Her delivery re-echoes the beauty of love, how it has the power to scar your soul and also how likely it is push you to the brink of insanity.  Her is strong, tragic and yet sublime and beautifully accentuates all the emotions that the play sought to engage.

Regardless of the play being a tragedy, there are still some appreciable amounts of humor and wit in it. After all, what’s a good play without some few good laughs. But it didn’t take too much away from the intense and gripping vibe that the entire play came with.

Impressively the actors kept the show alive when they were faced with an unexpected mishap with the sound. Fortunately, Janeral Ntatia one part of the 2 idiots who are the hosts of the Wednesday theatre, managed to find a creative, improvised way to step into the act and a bid to save the situation before long. And it was smart and very timely.

For a young crop of talents to put together a play as endearing as this, they need to be applauded and encouraged.  We would love to see this play again possibly in the main auditorium of the theater in the presence of a larger audience. Hopefully, that should happen sometime soon for DeCrew productions.

We would rate this play 3.6 stars out of 5. We weren’t expecting much from it but we had an absolutely great time, enough to make is converts for Wednesday  theater at the Folks Place of the National theatre.

In the end love wins, the acne can spread but when two hearts are meant to be together they would fate always finds a way of bringing them together. Even if it’s just to cause them some more pain.

If you saw this play, do well to share with us your thoughts on it in the comments section below.  And also spread the word to win some more converts for Wednesday Theater with The 2 Idiots.

Stage Play Review: The Boy Called A Girl – A cassock can cover a man’s skin but never their character!