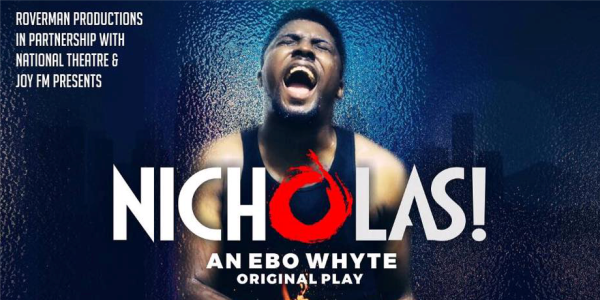 It’s almost as if Uncle Ebo Whyte’s play’s get complex and more daring with every quarter and we can’t help than to be awed each time. His desire for perfection is almost routine and is taken up a notch with each production and this quarter isn’t any different.

Nothing compares to telling a true Ghanaian story. Especially that of an iconic figure and throwing light on some of the most challenging moments of their lives. Uncle Ebo Whyte and his Roverman Productions team did exactly that in their latest play titled “Nicholas”.

This play, the first if its kind we have seen, dramatically details the life and ministry of the well-known Archbishop Nicholas Duncan Williams to commemorate his 60th Anniversary.

In the play we see an adult Duncan Williams taking us through very memorable chapters of his life in a narrative flashback style. We get to see the series of misfortunes that not only preceded his birth, his struggles as a delinquent adolescent, his desperation as a teenager looking to succeed by all means possible, his redemption from mental and emotional battles and his triumph over mundane convictions even after he started his ministry.

What’s most amazing about this play is how it manages to capture all the details of Archbishop Duncan Williams’ life over the years and yet still remain current and upbeat with several trending social topics. It’s almost as if most of events been told in this play happened in recent times and not sometime over 30 years ago.

As usual the amazing cast gave an exhilarating performance that livened up even the most intense scenes of the play. You could still find some humor in the most trying of his misfortunes and challenges. Besides what’s the use of a stage play if you at not left rolling on the floor with laughter with some candid exaggerations.

For the second time the LED Screens stage setup really helped with the complex nature of this play and the fact that the story being told required several distinctive settings. At this point we are sure Roverman Productions have totally gone digital with their staging and aren’t going back to the rudimentary set ups. We are already looking forward to seeing their next production and what new tricks they have up their sleeves tech wise.

We believe that this is certainly one of those stories a lot of Ghanaians would love to be told in any form or adaptation. Uncle Ebo Whyte’s seems to have opened the doors for more plays like this and we certainly do have the appetite for them already. There are several iconic figures in the history of Ghana that could be shown in the same light on the theater stage.

If the Archbishop himself was literally stunned and impressed by the dramatization of his own story then you can imagine how great of a feat Roverman Productions must have achieved with this one.

We won’t hesitate to give this play a perfect score because it provided not only the entertainment we expected. But also, it provided some form of religious credence that we least expected to see. If nothing at all this play speaks on the power of God in the lives of a believer and the unimaginable heights faith and firm resolve can lead us to.

We say this all the time and can’t stress it enough at this point. But if you haven’t seen an Uncle Ebo Whyte play before, this should be the one to win you over to that side. There is no doubt that you too would become a believer and a regular at stage productions after going to see this one.

You might have seen several biopics in motion picture format but nothing as compelling and endearing yet still very hilarious and entertaining as what “Nicholas” brings to the National Theater. This certainly is a must see for all.

Make sure you go see it this weekend 25th and 26th of November or the next weekend 2nd or 3rd December. Showing times are 4pm and 8pm at the National Theater on each of the days.

If you have seen this play share with us your thoughts on it in the comments section below.