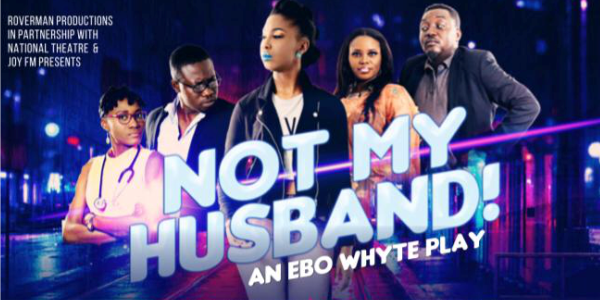 There is no denying that Roverman Productions has outgrown the National Theartre and the evidence lies in the scores of patrons they are able to pull in for each showing of their quarterly plays. This weekend wasn’t any different either. With the main auditorium of the theatre filled to capacity even with additional seats provided, we got to enjoy “Not My Husband” another one from the seasoned playwright and his team that is sure to remain fresh in my minds for a long time.

In “Not My Husband”, Alice a successful and renowned musician is involved in an accident and falls into a coma. With the fear of her being brain dead, medical staff of the private hospital she is sent to do their best to keep her alive. She finds her soul trapped in the ‘3rd dimension’, a place between life and death, in the company of her grandparents she adores so much. She initially finds that she lovess it there and is not interested to return back to life and all its pressures. Meanwhile, Obed her husband, who she doesn’t seem to love and care about is broken and dejected by the possibility of losing her. Whilst her mother and father also fight through their own issues and who loves her the most.

The battle for Alice’s life goes beyond just the physical as it appears her soul is not willing to return. Especially if would involve having to return to her husband who she despises for no particular reason regardless of him being faithful and devoted to him. We get to discover that her issues stem from the broken home she grew up from and how both her parents might have influenced her life one way of the other.

This play puts a lot of things in perspective about relationships of all kinds. It carefully dissects the emotional and psychological struggles of having to love someone when you are not loved back as well as the challenges that come with being successfully and dealing with the fear of failure.

Jackie, one of the nurses assigned to take care of Alice begins to fall in love with Obed. And after months of being in a coma and starring down from the 3rd dimension she is torn between leaving the new comfort she’s found and learning to love the man who refused to give up on her. To escape the 3rd dimension, Alice must reclaim the love she rejected especially now that her life depends on it.

The set design incorporates props and a layout that shows an Intensive Care Unit and a waiting area in a hospital as well as a riser that served as the ‘3rd dimension’. The actors utilized that layout very well giving us a clear view of at most 3 different events happening simultaneously at some points in the play. The riser served as place ‘up and above’ from where the spirits of Alice and her grandparents could see the how the living were handling the situation.

Even with the central plot of a life hanging between life and death as well as its intricate themes surrounding life and death and alternate dimensions, there is still a lot to laugh about in this play. The characters are still humorous in all the seriousness and you can’t help but laugh even with the thought of life being lost on your mind. There is also some very satisfying singing in this play and we were more than awed by the vocal dexterity and display by the characters Obed and Jackie. They certainly did blow us away with their spot on singing as well as how appropriate those choice of songs where for those scenes in the play.

We would rate this play a well deserving 4 out of 5 stars for its ingenuity, originality and execution.   Even in their 11th year, Uncle Ebo Whyte and his Roverman Productions team are still going strong and have built a strong, loyal following for whom they go to all extents to satisfy with each quarter’s play.

If you were at any of the showings of ‘Not My Husband’ over the weekend, share with us your thoughts on this play in the comments section below. Also make sure you encourage someone else to go see this play as it showing again at the National Theatre on Saturday, 12th or on Sunday, 13th of October 2019 at either 4pm or 8pm on each day.