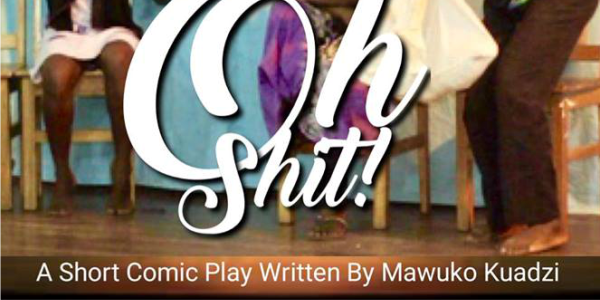 Last night we were guests at an event at the Kanda Library, that was climaxed by a stage play titled “Oh Sh*t”. The event was put together by HOGOF Theatre Academy to commemorate their 17 years anniversary.

The night started off with some beautiful cultural drumming and dancing from the academy’s dance troupe that was a beautiful to set the tone for the night.

Oh Sh*t, a short comic play about a local community that shares a single public place of convenience. It gives us a look into their lives of the residents in that community and how their lives can be affected by this.

The humor laden dialogue although a bit raw at times clearly captures how some residents can come very oblivious of the health implications of sharing a poorly kept public place of convenience. Whilst also identifying how each individual might have contributed to the problem. We all have a role as individuals to play when it comes to sanitation matters and she be help complicit when it gets worse in our communities. The job shouldn’t be left to only a few but for all of us.

This stage play also seems to give testament to Mawuko Kuadzi’s (the playwright) eye for spotting and grooming talents.

Arguably, delivering a serious message in such a humorous way is sure to get the audience attention. Giving them good entertainment and leaving them with enough to think about after the play. The issues on sanitation and healthcare need to be a constantly discussed especially just as we about starting the rainy season.

The play satirically jabs the government and leaders of our communities for their neglect of roles and contribution to the worsening situation. When indeed so much more on their part can be done to ensure that the health needs of the people are well catered for.

We will rate this play a well-deserved 3.5 out of 5 stars. Although quite short, its message was concise and very direct to the point and done with very decent humor that was well delivered and acted out. The cultural performances on the night was also worth commending, indeed HOGOF Theatre Academy proved that they really do have talents and skills that can be patronized by all and sundry.

We would absolutely love to see this play again on a bigger stage with a larger audience in a bigger venue and hopefully a much lengthier- detailed piece so we can get to enjoy more of the performance from the talents from HOGOF Theatre Academy.

If you were also at the Kanda Library last night to see this play, share with us what you think about it in the comments section below. If you didn’t get to see it, be on the lookout for “Oh Sh*t” and make sure not to miss it the next time its been staged.

Stage Play Review: Dora Why? – Murder and A family’s Secret.

Stage Play Review: The 2 Idiots’ served up “The Man In the Dark” on Valentine’s Day.