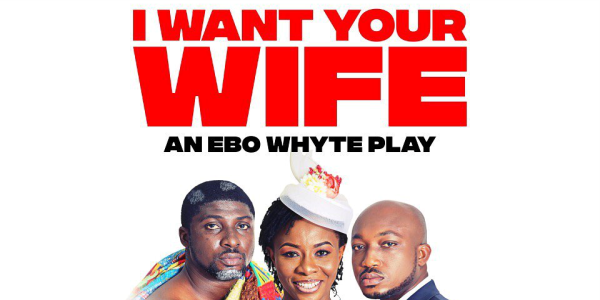 Each quarter we get to see an Ebo Whyte play that sets out to be better and bigger than the last and its always a great feeling by the time the play is done. This weekend was no different. The thunderous fits of laughter and applause riddled through the filled to capacity National theater on Sunday. Giving testament to the fact that “I want Your wife” was well publicized and it lived up to expectations.

In this play, Ben and Abena have been married for ten years and it has been heaven on earth, until there is a message from a Prophetess in their church that Ben should give up his wife to another man. The cracks on their marriage begin to show and they must both either fight for what they want even if that means giving in to the prophesy.

The play opens with characters at a church service where the prophesy is given. And the story continues into the home of Ben and Abena until the climax back in the church. Abena, according to the prophesy is to leave her husband and marry the successful and wealthy Deacon Yeboah. Just like anyone would be in such a situation, she is confused and expects her husband to be the one to fight for her. But the situation brings to bare certain issues they hid from each other concerning their marriages. May be to test their faith or their marriage was really never meant to be.

You would think a matter as serious as prophesy, especially for Christians, could not be something to make jokes about. This play is packed with so much humor yet doesn’t let down on the seriousness of its message. The characters in their own unique ways are humorous yet still serious in expressing the emotions that you would expect to see in the situations they find themselves. Even at that point in the play were the characters express themselves through rap lines there are still appreciable levels of humor and also the seriousness of the situation needed to have.

Again, this another one of those plays that every young couple Christian couple needs to see. By the end you are sure to asking your selves several times what you would do if you were to be in either Ben’s or Abena’s shoes. You are left asking yourself if a prophesy would be enough to come between you and your significant other? How do you even verify or confirm that a prophecy given about you is true or false?

It also subtly touches on the church’s role in making sure that marriages work as well as how some churches and their leaders fail for several reasons in ensuring that no man comes in between “what God has put together”.

Indeed, the failure to be decisive on issues can create monsters which later come and cause harm and this play delivers well enough on this message. Silence helps, but when there is the need to stand up and speak, there is no point holding back.

We would rate this play a 4.5 out of 5 stars. Its entertaining with no dull moment from start to finish. Flawless and impeccable delivery from the cast and mostly importantly it climaxes with a strong message. Yes, prophecies would come, but Christian faith requires that you trust and believe God for a sign to confirm that it is indeed in his plans for you.

Uncle Ebo Whyte and his Roverman Productions team put on another great show that needs to be seen by everyone. If you didn’t get to see the prophecy filled “I want your wife” stage play over the weekend then make sure you make it to the National Theater next weekend 13th and 14th at either 4pm and 8pm.

If you have seen this play, share with us your thoughts on it in the comments section below and don’t forget to share this review on social media with the hashtag #iWantMyWife

Stage Play Review: The Boy Called A Girl – A cassock can cover a man’s skin but never their character!