Stage Play Review: “Still A Rose”- Is There Love Beyond The Abuse? 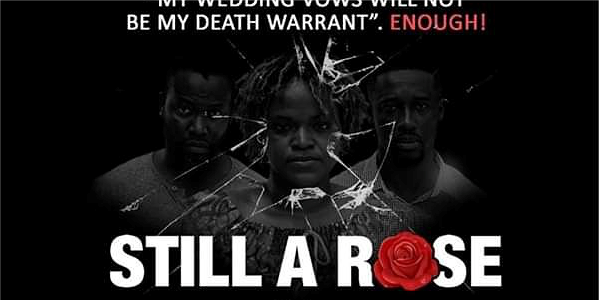 It is always nice for us to review a work of art that has a strong message that hits home in several ways whilst still providing valid and needed entertainment value. This new play on the subject of domestic abuse from Fiifi Coleman Productions put us in a pensive mood last Saturday night.

Still a Rose, is an emotion eliciting stage play that speaks on the matter of domestic abuse in relation. Stella Rose is in a relationship with Ike, the perfect gentleman who is loved by her entire family’. To everyone she is in a perfect relationship with a man who loves her and her child. Until she starts showing signs of being abused. She remains in denial until the abuse threatens to affect her daughter.

As the play progresses, we  get to find out that Stella’s choice to stay in a violent abusive relationship has not only to do with the fear of losing the man she believes she truly loves, but also inherent psychological scar which she picked up during her childhood watching both her mother and grandmother deal with their own situations of abuse. Her problem is clearly psychological and seems to be generational; an issue that is most often overlooked by many. It’s either she breaks the cycle now or unconsciously passes down her emotional scars to her daughter just like it was done to her.

The young Jenelle Therson, who plays the role of Mandy Rose (daughter of Stella Rose) is an absolute delight on stage, with her innocence she steals the show with the confidence and eloquence with which she delivers her lines and does her singing with.  It is clear she has a limitless future in acting and the theatre arts.

Fiffi Coleman doubles as the director and also plays the role of Wofa K the drunkard all-knowing uncle. Alongside Clement “Clemento Suarez” Asheiteye, they provide all the humor and wittiness that this play required.

The fluidity of the play and the transitions in the acts was a bit marred by some sound hitches that left some of the mic levels dropping for some of the characters dropping. But the actors did their very best to  keep their dialogues and performances audible enough for everyone in the auditorium.

We would rate this stage play 3.8 out of 5 stars for its intent and the message it carries. The humor elements do not dilute the seriousness of this play’s theme yet is enough to keep the audience entertained and engaged.

Is there love without abuse? Is there ever a way out? . We are all scarred and but how do we break the cycle? This play does a bit to help provide some answers.

The truth still remains and this play does a decent job at rehashing it. Both men and women can be victims of domestic abuse in relationships and it is only encouraged when victims choose to stay silent though the abuse.

If you made it to any of the showings of “Still A Rose” at the National Theatre on Saturday share with us your thoughts on the play and its production.

If you didn’t get to see it then don’t hesitate to go see this play when next its staged with family and friends.  Also don’t forget that Fiifi Coleman Productions is here to stay and intends to push this subject matter through theater arts every year and could use all the support they can get.

Stage Play Review: Dora Why? – Murder and A family’s Secret.