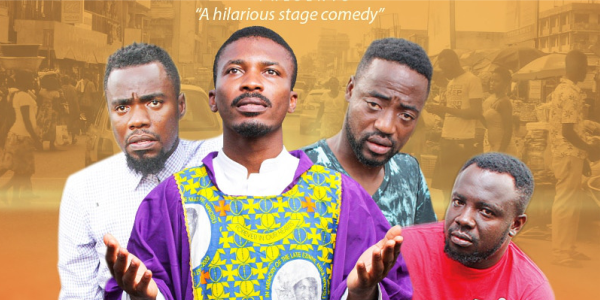 As was promised, Superfam Network put together another hilarious, entertaining stage comedy titled ‘Accra We Dey’ at the National Theater on Saturday and it lived up to expectations.

The play gives us front row seats into the lives of a ‘never-giving-up’ group of four friends from different backgrounds, trying to survive every day life in Accra, the disappointments from other friends and family and life. The friends share a unique bond that is strengthened by their quest to survive. Tbone (Foster Romanus) appears to be the toughest amongst them and the owner of the ghetto they share, were most of the acts in the play are set.

Each new day comes with a new challenge for them, from loosing out on job offers to finding ways to outside each other.  Their experiences within the length of the play does well to highlight the struggles of young graduates in the country as well as that of talented creatives who have to rebel against their families in other to pursue their dreams.  The idea of “by any means necessary” appears to be the only way to survive on the streets of Accra and this story finds a way to capture that in all the comedy.

The play enlists the help of Clemento Suarez, Foster Romanus, Jeneral Ntatia and Dr. So, as the group of friends at the center of the story. Their individual strengths as comic actors were in full display on the night as they took no prisoners. They kept the same energy through the entire length of the play sharing equally in the spotlight as they each did their best to leave the audience struggling not to fall out of their seats with laughter. They played along well referencing both past and present events/situations, some as fresh as a few days ago, with some frivolity to the delight of the audience.

This felt like the best we have seen from these stage actors and they couldn’t have pulled it off without the help of co stars  in the play like Fred Amugi, Kojo Delong, the rising young talent, William Odartei Lamptey (Willie Chambez) and a host of others.

The production told the story with a well-done set design that captured the setting and detailing of a ‘ghetto’ that severed as an abode for TBone and his cohorts on one side of the stage and also the inside of the church on the other side of the stage, where the play begins and ends. They also managed to throw in a ‘trotro’ scene which we believe could have been better appreciated if it had been accompanied by ambience of a moving vehicle for the actually journey and not just that of a trotro station before the start of the journey.

By the end of the play you are reminded that no matter the situation you find yourself in, things can and would get better if only you don’t lose hope. Accra We Dey subtly inspires you, the journey might get tough and the hustle is indeed real, but what life can certainly get better for everyone.

We at GhMoviefreak.com absolutely loved this play and would rate it a well eared 4.5 out of 5 stars. It was unapologetically hilarious from start to finish without a dull moment yet climaxed with a decent message that could linger on in our minds for a very long time.

Being only their 3rd outing so far, it is safe to say the team at SuperFam Network are getting better at this and we can only continue to expect more from them.

If you missed out on this one, don’t lose hope yet, Superfam Network would be most likely forced to restage this play again by popular demand and we will be the first to break the news to you when the time comes.

Also, if you were fortunate to have also been at the National Theater on Saturday to see “Accra We Dey”, do well to share with us your thoughts on the play and the entire production in the comments section below.

Stage Play Review: “Still A Rose”- Is There Love Beyond The Abuse?