Stage Play Review: The 2 Idiots’ served up “The Man In the Dark” on Valentine’s Day. 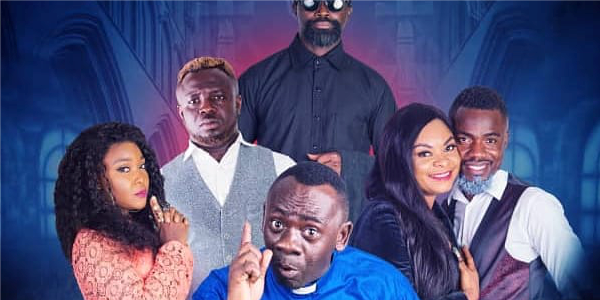 The 2 idiots, Dr. So and Janeral Ntatia gifted patrons of the National Theater with a stage play production titled “The Man In The Dark” on Thursday evening, Valentines day.

The Man in Dark is a romantic stage comedy play about a successful businessman who finds out that the woman he had affair with in his past happens to be his pregnant wife’s best friend. Everything he has worked for all his life depends on this secret being kept from his wife so he must rely on his own best friend for a way.

This play’s story turned out to be more than we expected from the 2 idiots. It puts us in the home of what anyone could perceive to be a happy couple who turn out to be both having their own reasons for entering the marriage. We get to see an unfaithful man who would go to the very extreme just to save his marriage for very peculiar reasons other than love.

No body is perfect, even the happiest of couples might have their own secrets and this play finds a way to remind us of that. People go into marriages with their own agendas and expectations that could take a toll on the fundamentals that are supposed to hold the marriage together.

The 2 idiots played polar opposites to each other in this play, Dr. So plays a successful, well composed business man who handles himself like the powerful man and the CEO of very successful business outfit whiles Janeral Ntatia plays his complicated, clumsy best friend who can’t seem to keep a job for more than a week. The two characters share a unique bond that made their interactions on stage very hilarious and dramatic as well.

Seasoned actor, Akrobeto is clearly a natural at this thing called comedic acting and he spares no ribs in this play. He is his usual, effortlessly hilarious self, killing it with every line of dialogue that is guaranteed to make you fall out of your seat with laughter.  In his return to stage acting after several years away, he plays the role of a pastor, a character that highlights all the things that make some men of God very bizarre to deal with. He delivers his act with so much ease and precision that we hoped he would step into some of scenes just to keep up the excitement.

Beverly Afaglo‘s debut stage appearance proved that she is willing to take on the challenge and would absolutely love to see her do this more often.

The play manages to keep a twist in the plot for the final acts revealing who really the “Man in the Dark” is and the significance of that title. The revelation gives the entire play a very satisfying climax that makes you appreciate the writers(Dr. So and Janeral Ntatia) and their choice of putting together a story like this.

This play is directed by Solomon Fixon Owoo, Daniel Kojo Delong and Fiifi Coleman, anyone familiar with their work can attest to the fact this collaborative effort is worth applauding.

We would rate this play a well-deserved, 3.8 out of 5 stars. Besides the intermissions that dragged the play much longer than we had hoped for and a few pardonable hiccups in the production we did enjoy the entire experience and were left with so much to discuss and debate on our way back home.

2 Idiots Productions plan on staging this production again later on in the year and you shouldn’t have any excuse not to go see it. It would be worth your while and your guarantee of a good time and entirely satisfying experience.

If you were at the National Theater on Valentines’ night with us, then do well to share with us in the comments section below your experience as well as your thoughts on this play.