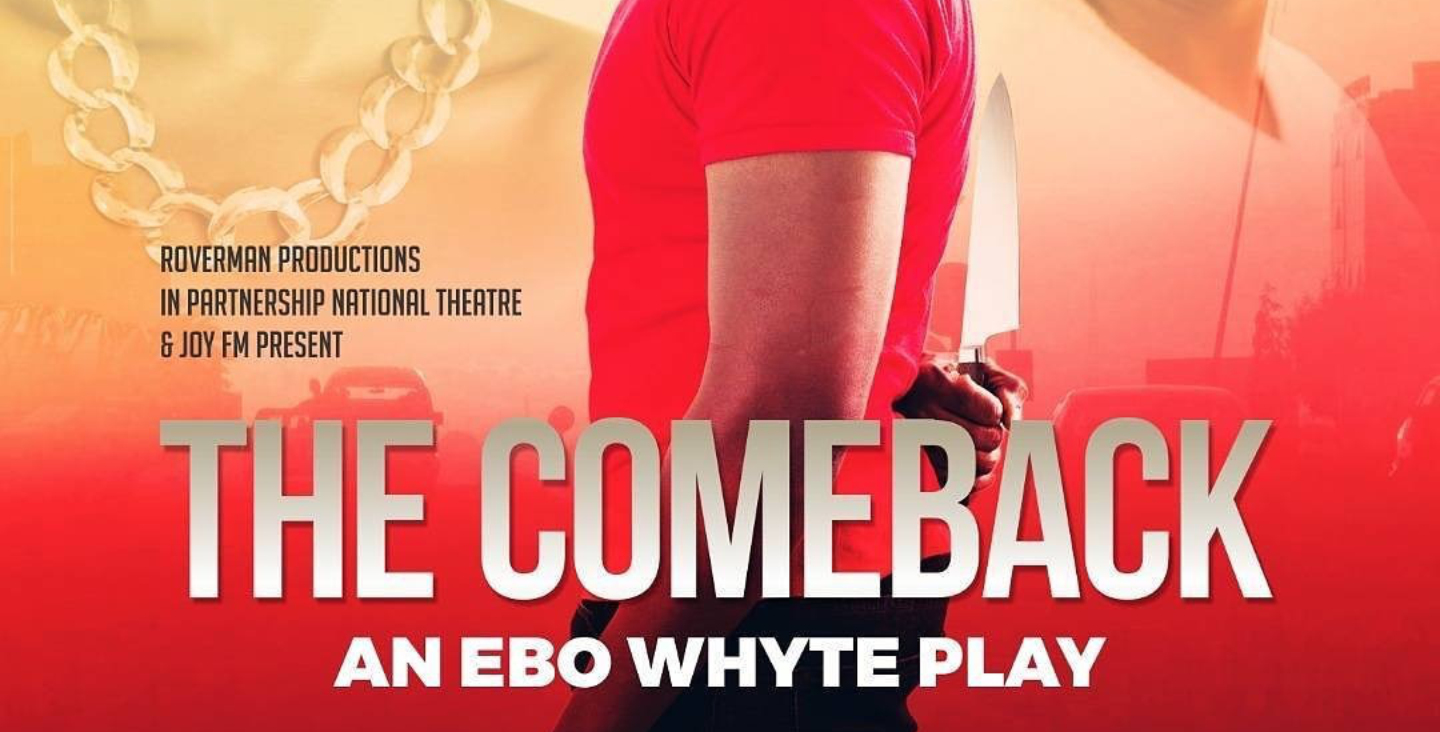 It’s clear Roverman Productions refuses to let go of their hold as being one of the foremost theater production houses in Ghana. Sticking to their tradition of quarterly plays, they return this 3rd quarter of 2017 with another exciting play “The Comeback”.

The comeback is a comedy filled play about a professional footballer who returns home on injury after playing for a long period in Europe. He finds out that all the property he thought he had worked for and acquired back at home had been either squandered or taken over by his brother. With the future of his career hanging in the balance he must face his past and some mistakes he made in order to get his life back on track, that is if he really can.

Yet again, Uncle Ebo Whytes succeeds in tying in a plethora of very relatable situations into what might seem like a very simple subject matter.

The general perception of what a Ghanaian footballer playing in Europe is supposed to be is comically captured in the excellent performance by Andrew Tandoh-Adote. He perfectly personifies every single stereotype that we might have about foreign based players, from appearance right down to speech. We can’t overlook Andrew’s acting prowess as he shows us a different side of himself with every new role we’ve seen him play over the years.

You don’t even have to be so much engrossed in the dialogue to be able to appreciate the humor in this play. Joojo Ronaldo played by Andrew Tandoh-Adote just nails it with his impressions and wise sayings he gives out in this play. Guaranteed, there are too many good laughs in this play with very witty humor that made lots of sense even as you tried to hold back the laughter. As much as the lead character’s presence was very dominant in this play, you could still feel and appreciate humor from all the other casts in the play. There were more than a million reasons who this play was just too funny and we just got sucked into the entertainment.

But in the end its message was not lost on us either, when you fall … you either stay down or pick yourself up and keep going.

Like Joojo Ronaldo aptly puts it in this play “The elders have a say that… when a cow is orphan, it sucks own breast”

Our initial reaction to the stage setup when we entered was just pure surprise. Even before the play would start we had our minds wondering how the LED displays would be used in this play certainly because this was the first time we had seen any production dare to try this.

The opening act begun and we were introduced to beautiful digital representation of the inside of a home. The set design added a touch of difference to Roverman plays we’ve seen over the years. It even incorporated external footage that were purported to give an in-real-time feel to some of the acts in the play. The execution for this was well tell timed and excellent and even received some applause from the audience who were equally impressed as we were.

This is another Roverman Productions play we wouldn’t hesitate giving a perfect score.

On many levels, we felt anyone could relate in one way or the other to the theme of this play. It spoke about being betrayed by the people closest to you when you least expected them to. And also, the herculean task picking yourself up and stay focused when you feel you have lost it all and have no more reasons to keep pushing.

If you haven’t been to any Uncle Ebo Whyte play’s yet or you simply aren’t a fun of stage productions, this is play that would surely convert you. You just have to go see it and then you would know for sure.

Do well to go see The Comeback at the National Theater this weekend 2nd and 3rd September 2017 or next weekend 9th and 10th September 2017, showing times are 4pm and 8pm on each day.

If you saw last night’s opening of The Comeback do well to share with us your thoughts in the comments section below.

CHECKOUT OUR REVIEWS FOR OTHER UNCLE EBO WHYTE PLAYS HERE