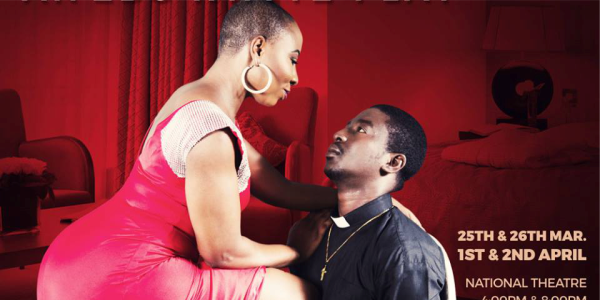 If you know Uncle Ebo Whyte and his Roverman Productions team then of course you know that they grace us every quarter with a new stage play. From as far back as 2008 this has become more like a tradition we’ve come to love and always look forward to. Sticking to that tradition, they present to us lovers and believers of theater arts another hilarious play tilted “BLACKMAIL”.

At the center is of this play, we have Reverend Elisha, a renowned man of God who receives shocking news on the night before his consecration as bishop that his wife of over 20 years has been cheating on him with a new member of their church. Even before he can decide on what to do with the news, a secret from his past he had confidently buried rears its head and threatens to destroy not only his almost failing marriage but also his entire existence as a renowned man of God. With the clock ticking, he has to take a decision that has the potential to make him lose either his wife or his ministry, or both.

As has become very typical of Ebo Whyte plays, he brings to us a very relatable story on a subject matter which could be a bit uncomfortable to discuss. Men of God are so revered at times that we often forget that they are also human and are equally as flawed and imperfect as the rest of us. We often hold them to a very high regard and fail to see the challenges they are faced with in the course of doing their work.  This play shows us a fair look at some of these challenges. From dealing with everyday marital issues, extortions as well as the never ending fight against desires of the flesh.

The play makes good use of some familiar and new faces in telling the story in the most hilarious way possible. Abba, Reverend Elisha’s secretary was really one very interesting character. Her chatty talkative traits turned out to be more entertaining and good comic relief rather than repulsive.  You are guaranteed a good laugh anytime she stepped on the stage.

Besides the main plot surrounding the troubled man of God and his wife, the play subtly unearths a romantic subplot that gives a little more attention to other characters in the play. With a selection of songs that cuts across several genres you are sure to laugh and occasionally sing along as the play progresses.

One of the strengths of this play is the subtle nature with which it reminds us about God’s never ending love for those who believe in Him and endeavor to seek His face no matter what challenge they are faced with. It also highlights on the extremes some women are willing to go in order to save the fate of their marriages regardless of the  sanctity of their marriages been broken through infidelity. It also hints on desperation, revenge, sacrifice and good old romance.

Although the play starts off a bit slow you are sure to be rolling on the floor with laughter by the time is ends.

GhMoviefreak.com rates this as another excellent production from Roverman Productions we would score this play 8.5/10.

If you enjoy and appreciate a good laugh you should do well to go see Blackmail. It’s being staged again this weekend on 25th and 26th of March 2017 and again next weekend the 1st and 2nd of April 2017 at the National Theater at 4pm and 8pm each day.