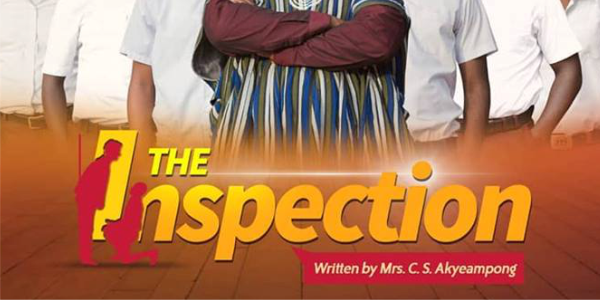 Having the major faces of present day Ghana comedy presenting on one stage, we definitely were expecting to have a well-served plate of comedy with no additions of boredom. Especially with a title that some carries a good nostalgic feeling to anyone who has ever been in the boarding house.

The Inspection; a play set in present day – high school boarding house with a comical theme about a group of hilarious students as they go through the hustle and bustle of making sure they come out as the best during an inspection spree/competition in school.

This is a play with a well-defined plot of student life, where dormitory inspection is one common scare for obvious reasons, however this was scarier as this was unexpected and an emergency to be conducted by the senior housemaster himself. We identify the efforts put in by these students to keep up a clean and perfect dorm, however covering up on things they assumed will be of least concern. Eventually we see the senior headmaster unexpectedly exposing the exact covered flaw per individual.

Though coming from the comedy angle the play leaves us with provoking thoughts that, we can’t cover up our wrongs well enough for there is always a greater eye who sees and knows of what is hidden and concealed. We took pride in the fact that, majority of the crew if not its entirety were products of our very own school of performing art which makes us believe that the future is guaranteed.

The blend of narrative spoken word art is commendable and the artist displayed great skill at it. Theatre is a wholesome art of drama poetry, music, dance and many more. And this play was able to give in measured proportions each of these elements.

The cast was a solid choice. The couldn’t have been a much better combination and stage chemistry than what we witness with the group consisting of Clemento Suarez, Janeral Ntatia, Dr. So, Foster Romanus and Lawyer Ntim. They each uniquely stole the show at varying sections of the play.

Although some sections had longer narratives which risked the entertainment, there was always a line or an art that was sure to thrill the audience and engage us.

Knowing the writer, Mrs. C. S. Akyeampong put up this script about 10 years ago shows the quality of our theatre industry and should we invest and explore much, Ghana theatre is sure to be among the very best.

And judging from the reaction in the audience response to the performance by the comedic actors, “The Inspection” delivered on not just the nostalgia but did a great job holding up the interest of everyone seated in the national theatre from start to end.

Our discomfort with this play was the scene where the cast had to change on stage. Being initially in shorts and had to swap to trousers. In that process, taking off the entire shorts, for us to see the under shorts could have been avoided especially the fact that the audience was made up of all sorts and ages, perhaps in another production this could be considered. We could sense the uneasiness amongst some of the audience during those acts.

Regardless, we would rate this a 3.9 out of 5 stars for the amazing experience. And also considering that this is the first production from SuperFam Network we are witnessing. There is no doubt that they are here to give out nothing but the best.

If you missed out on “The Inspection” then we feel bad for you for missing out on the rib cracking experience. But do not despair, we are quite certain it would be staged again, hopefully sometime this year. And as always, we would well to update you with showing dates and times.

If you did get to see it, do well to share with us your thoughts on the play in the comments section below.