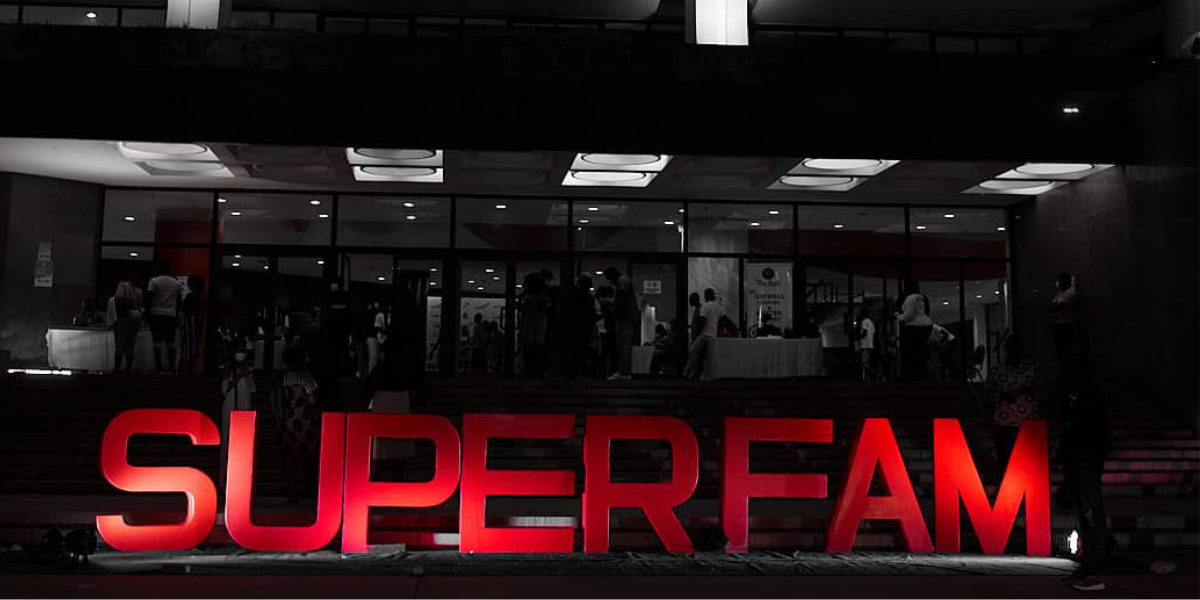 After a long break, it’s nice to see theatre productions returning to provide patrons with some much-needed stress relief. Superfam productions returned over the weekend with another hilarious stage play titled ‘Arsenal Again‘.

At the centre of the play is Arsenal (played by Superfam stage regular Jeneral Ntatia), he’s a smooth-talking, slick, con man who won’t miss out on any chance to make money even if it means swindling his close friends. And there is Master Richard (played by Foster Romanus) a deportee who owns a barbering shop. His attitude to work is bad and he hasn’t seen any growth in business for years. He is influenced by Arsenal and another to employ a young SHS graduate Kweku Frimpong (Willie Chambez). After years of frustration trying to get a job, Kweku is focused on making the best out of any opportunity he gets.

After a shaky first day at work, Kweku Frimpong decides he must give his all to turn things around and he full commits to that decision after. But Arsenal has his scheme that involves the barbering shop.

For the setting of the play, most of the events are limited to the insides of the barbering shop and the food joint next to it. The characters are however able to make the best out of it.

Interestingly, an audience member’s marriage proposal was craftily woven into the stage act much to the delight of the audience. You could tell by the applause and cheers from the audience. The way and manner in which the proposal was done without breaking the flow of the act on stage is w what I would commend. It certainly goes to show how the Superfam team is committed to satisfying their audience in any way that they can.

The play’s director Francis Tetteh Nutakor assembles a huge cast of characters to stage this play We get to see cameo appearances from stand-up comedians Lekzy and OB Amponsah who craftily plug their upcoming specials. There is even a surprise flash mob from a dance group from the University of Ghana that fits well into the storyline as well.

Albeit some sound challenges, Arsenal Again delivered exactly what it intended to serve, lots of laughter and quality entertainment on a Saturday at the national theatre. I would score Arsenal Again 3.5 out of 5 stars.

After the laughter and good time, you are sent home with a message at the back of your mind. Nothing good comes easy and hard work pays. You are also reminded that trust is an important part of business ethics.

It’s clear now that Superfam Productions is steadily becoming a household name in the theatre space. Their niche audience gradually growing and you wouldn’t want to be left out.

When next you hear ‘Arsenal Again‘ is being staged don’t miss it.