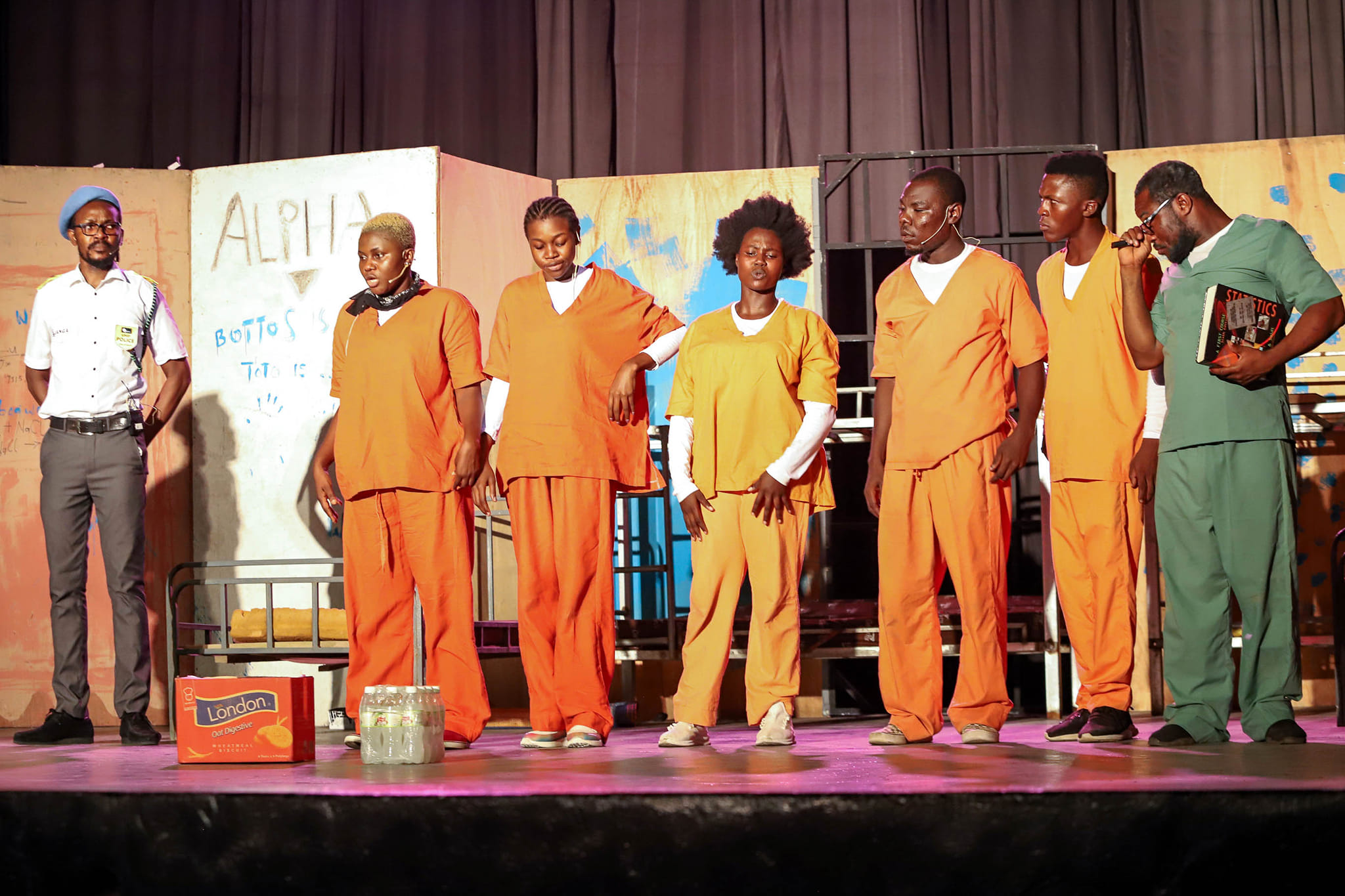 ‘The Prisoners‘ is a play is written by Nii Ayi Solomon and directed by WK Dziewornu-Norvor.

In a satirical way, the play highlights many of the issues affecting our prison services. It highlights some of the harsh realities of our justice system and how it fails at reforming inmates leading to the high rates of recidivism that we have.

The play follows the lives of several inmates and their prison warden. Capturing some of the ills that go on in the prisons from drug usage, abuse of power right through to the corrupt practices of prison guards.

The play is entirely set in the confines of a prison. The stage set-up shows the inside of the cell shared by the inmates as well as an administration office for the prison officers.

The prisoners take turns to share their stories about how they each ended up in the grips of the law.

TT who appears to be the cell leader also detailed how he ended wrongly arrested in a swoop for armed robbers. He shares with so much disdain how one of his close friends lied to the police that he was part of the robbery gang that had been terrorising the community. He also revealed how he worsened his case by assaulting one of the officers and knocking out three of his teeth. TT even while in prison still manages to engage in mobile money fraud so he can send money back home for the upkeep of his mother and his daughter.

Amina Dagomba one of the female prisoners also shares how she ended up in prison for cutting off the manhood of her cheating partner. interestingly as ghastly as it sounds, the characters in the play can make this hilarious enough to have people falling out of their seats roaring with laughter.

Yaaba another one of the female prisoners story is the most bizarre amongst the lot. She narrates how a lovely weekend with her lover landed her in prison when she woke up the next day to find him lying lifeless in bed. She wasn’t able to defend herself and got thrown in jail for murder.

All the stories they share do not seem far fetched at all and chances are there are several people incarcerated as a result of similar if not the same circumstances.

Despite how funny the play and its characters are, you are at every point reminded that you too could, unfortunately, end up on the wrong side of the law.

The play also highlights how family and friends on the outside make it even more difficult for persons incarcerated. Paa Joe, another one of the prisoners in the cell for a financial crime he claims to not have committed. Whilst behind bars he has to deal with a difficult wife who wants out of the marriage even after all he had sacrificed for her. She visits him unexpectedly and disrespects him causing him so much pain when she is supposed to be a great support system.

It’s hard to imagine being in a situation like that and what effects that could have on your psyche.

Certainly, regardless of the crimes committed, inmates do deserve to be in decent enough living conditions and other alternatives to incarceration have to be implemented.

The amphitheatre at the Alliance Francaise serves as the home for village mind productions and their plays. It is commendable how the team made great use of the facility and the stage in the telling of this interesting story.

Despite some of the scenes feeling a bit too draggy, ‘The Prisoners‘ is a good play. It humorously carries a weighty message. I would score it 3.5 out of 5 stars. It is brilliant that this play chooses to tackle a delicate yet important subject like this. This might not be enough to cause a total change in the situation but it does add to the conversation about prison reform and that alone is worth commending.

Don’t hesitate to go see Village Minds Productions‘ ‘The Prisoners‘ when next you hear about it.