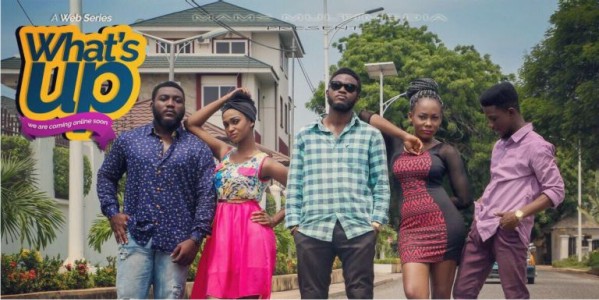 As much as we are not fully accustomed to all the various forms of arts and entertainment, one thing every Ghanaian looks out for is wholesome entertainment be it in film, theater or music.

We’ve all seen the potential of a web series introducing us to new stars and steadily helping to nurture new directorial talents – case in point, KOFAS MEDIA and the success of Kalybos.

Now it has become only fair that young film makers test their hands and grow their skills through small, mostly self-financed projects.  One of such projects is Whats Up.

What’s Up is written and directed by Horla Manuvor Jnr and follows the lives of six young adults and how they met each other through social media. The series highlight the youth’s acceptance of social media and how relationships are built through online acquaintances. It throws light also on how useful social media can be used for good and not just fun and entertainment.

This web series targets the youth and we believe its content would be best appreciated by persons between the ages of sixteen (16) and twenty three (23) years.

What’s Up seems to be following the approach of all basic short film scripts, that is; Set up a problem, introduce a complication and then finally, resolve the problem and complication with a perfect resolution. This might seem easy to achieve but can prove a lot more challenging considering that this is content being produced primarily for a Ghanaian audience – an audience that is most at times repulsed  and infuriated by change.

With each episode averaging just a little over 2mins long, the first four (4) episodes seem to be setting up a problem. We are now more than interested in seeing how this script complicates and then later resolve this problem it is setting up.

Although we were not too happy about the short lengths before, we seem to think it is one of its strengths. Besides it being easy on your data bundle when catching up with each new episode as its released on Youtube every week, it keeps you eager to want to see the next episode in your urge to find out “What happens Next?”.

Production wise, we’ve been impressed with the cinematography so far. Coming from young film makers we can only heave a sigh of relief that the future of our film industry isn’t bleak after all. On the other hand we seem to think the sound editing could have been better executed. The dubbing seems a bit off, giving some feel like the entire dialogue had been automatically replaced. Nonetheless all the scenes we have seen so far very audible.

The potential of a web series to go viral lies not just in the quality of its production but the wholesomeness of the entertainment it aspires to serve.  The idea is to be able to engage the viewers’ attention and then sustain their interest through all episodes to the eventual climax.

We would say “Whats Up Online” does have that potential. And we would be patient enough to wait for its peak.

In case you haven’t started watching this web series yet you can watch the first six (6) episodes below.