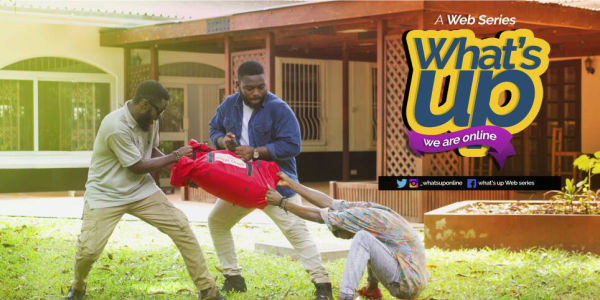 After pulling a reasonable following with its opening season, What’s Up Online, a web series created by young filmmaker Horla Manuvor Jnr returned with its second season a couple of weeks ago. And like its first season we’ve been following it with keen interest.

In case you have no idea what “WHAT’S UP ONLINE” is all about checkout what we had to say about it here.

So far it appears this season is deploying the second stage of all basic short film approaches.  The story is beginning to set up it complications after introducing us the viewers to a situation/problem in its first season.

Although this season doesn’t exactly kick off  where season one left us, the story takes a bit of a detour  as it takes is through the lives of our 3 lead characters as they get ready in their own ways for their hangout with the ladies. With a few hours to go to the big date with the ladies, Joey, A.J and Fiifi are each maneuvering personal obstacles so they don’t miss out entirely on the fan they are expecting to have.

Already the first four episodes of this season have introduced some new characters that have added some more debt to the plot. So far, we’ve been introduced to Joey’s (Kwaku Dawsay) mother played by the delectable Paulina Oduro. In our opinion, her presences add some bit of homely feel to the series. The story seems to have transcended from being about just our six young adults but also shows us a bit more into their personal lives.

If you were not happy with the runtimes of the episodes of season one, this season gives more to enjoy with an average 6mins for each episode.  With the longer episodes, it guarantees more entertainment and gives as much adequate suspense with the cliff hangers at the climax of each week’s episode.

We sort of feel the cinematography has taken a different approach.  The visuals showed so far, in our opinion; doesn’t appear as refined as what we got to see from last season’s episodes. In comparison, lasts seasons episodes looked sharper better edited than what we have seen so far.  Also, a few continuity errors in some of the shots have in a way dented the fluidity of the screenplay.  Fingers crossed that these are just minor goofs that would not be consistent with the other episodes. As it sort of ruins the entire viewing process for viewers like us who have no choice than to pay attention to all details in everything they watch.

Nonetheless, with just four episodes into the new season, the story appears to be taking up a good form. However, we only hope that it doesn’t stray away from its original intent of highlighting how useful social media could also be for young adults.

With about nine more episodes expected for this season we are optimistic that drama is going to get better and more intense.

Considering that it’s almost unlikely for young aspiring filmmakers to catch any big breaks in our film industry presently, it is very necessary that we support all efforts of theirs at making contributions to the growth of us film industry.

If you are yet to start watching this fun, first of its kind web series, then, catch up with the entire season wrapped below.

Also check out first four episodes of season two so far as we all wait for the next episode scheduled for this Saturday.